WESLEYAN METHODISM]. A collection of autograph letters and transcripts of letters by the Cooke sisters of Trowbridge, Wiltshire (Eliza, Frances and Mary who married the Revd Dr Adam Clarke), addressed to the Revd John Wesley, Adam Clarke and others, ...

WESLEYAN METHODISM]. A collection of autograph letters and transcripts of letters by the Cooke sisters of Trowbridge, Wiltshire (Eliza, Frances and Mary who married the Revd Dr Adam Clarke), addressed to the Revd John Wesley Adam Clarke and others, 1783-1836, including: Twenty-four autograph letters and two incomplete letters signed by Eliza Cooke, Trowbridge, 1783-1788, to Dr Adam Clarke (at Wesleyan chapels in Norwich, Leeds, St Austell, Bristol, Plymouth and the Channel Islands), with autograph postscripts by Frances and Mary Cooke and I. Martin, on spiritual matters and practical affairs, approximately 90 pages, folio , each with address panel endorsed by Clarke; autograph letter signed by Adam Clarke, Dublin, 1790, to the Revd I Creighton, Methodist Chapel, City Road, London, expressing forcibly his views on animal magnetism, 3 pages, 4to ; two autograph letters signed by Eliza Cooke to her sister Mary after the latter's marriage with Adam Clarke, on the birth of her child and the death of Wesley, 1791, 7 pages, 4to ; autograph verses by Adam Clarke, Bristol, 1801, 4 pages, 4to ; four autograph letters signed by Mary Clarke, to unknown correspondent, 1790, to her niece Henrietta, 1807 and two to her daughter-in-law Matilda, 1831-1836; two autograph letters relating to the Revd Adam Clarke's manuscript collection, British Museum, 1833, 1835 The transcripts include a letter book containing autograph transcripts of twenty-one letters by Mary Clarke to the Revd John Wesley ('my honoured spiritual Father'), 1785-1789, many written in response to letters addressed to her by Wesley, on spiritual subjects, the progress of Methodism and her relationship with Adam Clarke, 19 pages, folio ; folder containing autograph transcripts of letters by Mary Clarke, 1784-1832, the majority 1784-1788, to her sister Eliza (3), Miss Peacock in Bath (15), Mr Perkins at Freshford (6), Miss Bishop at Keynsham (1); to her mother, asking her permission to marry Adam Clarke ('I know your strong opposition; I know it has been said, that you had rather see me die than united to him', 2); Mrs Stock of Bristol (2); Editor of the West Briton, Truro, protesting at the expression the 'Cornish Mob of Methodism' attributed to her husband, 1834, 38 pages, folio and 4to ; also, transcripts in the hand of Mary Clarke of three letters by Adam Clarke, two to [Eliza Cooke] reporting on a letter he had received from Wesley and to Mr Perkins, 1786, 1787; printed obituary of Mary Clarke and a notebook entitled 'Detached Thoughts' These letters provide a detailed picture of a Methodist circle close to Wesley himself in the 1780s. Mary Clarke, whose spiritual quest was directed by Wesley, was born in Trowbridge in 1761, the daughter of John and Mary Cooke. Her mother, an Anglican, had received John Wesley in her house when he first visited Trowbridge and subsequently two of her daughters, Eliza and Frances, joined the Methodist Society, though Mary did not become a member until after her marriage in 1788 with Dr Adam Clarke. Mary Clarke became a Leader in the Society 'for which important office', her obituarist wrote, 'her experimental knowledge of the work of God [...] eminently qualified her'; she offered spiritual counsel and pastoral care. She died in 1836. Dr Adam Clarke (1762?-1832) was a popular Wesleyan preacher, commentator and theological writer who was president of the Wesleyan Society on three occasions (1806, 1814 and 1822). Born in Ireland, his education was aided by Wesley himself and he later became a distinguished scholar in the varied fields of patristics, Asian religions and natural sciences. He was appointed in 1782 to Bradford, Wiltshire, his first circuit, in which Trowbridge was included and became the spiritual advisor first of Eliza Cooke and then of her sister Mary. 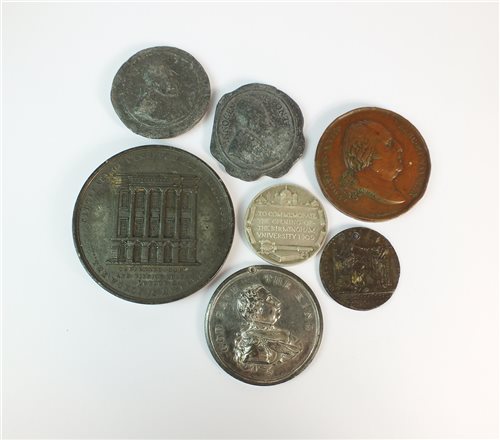 A collection of British and Foreign meda

A collection of medals, including RMS Lu