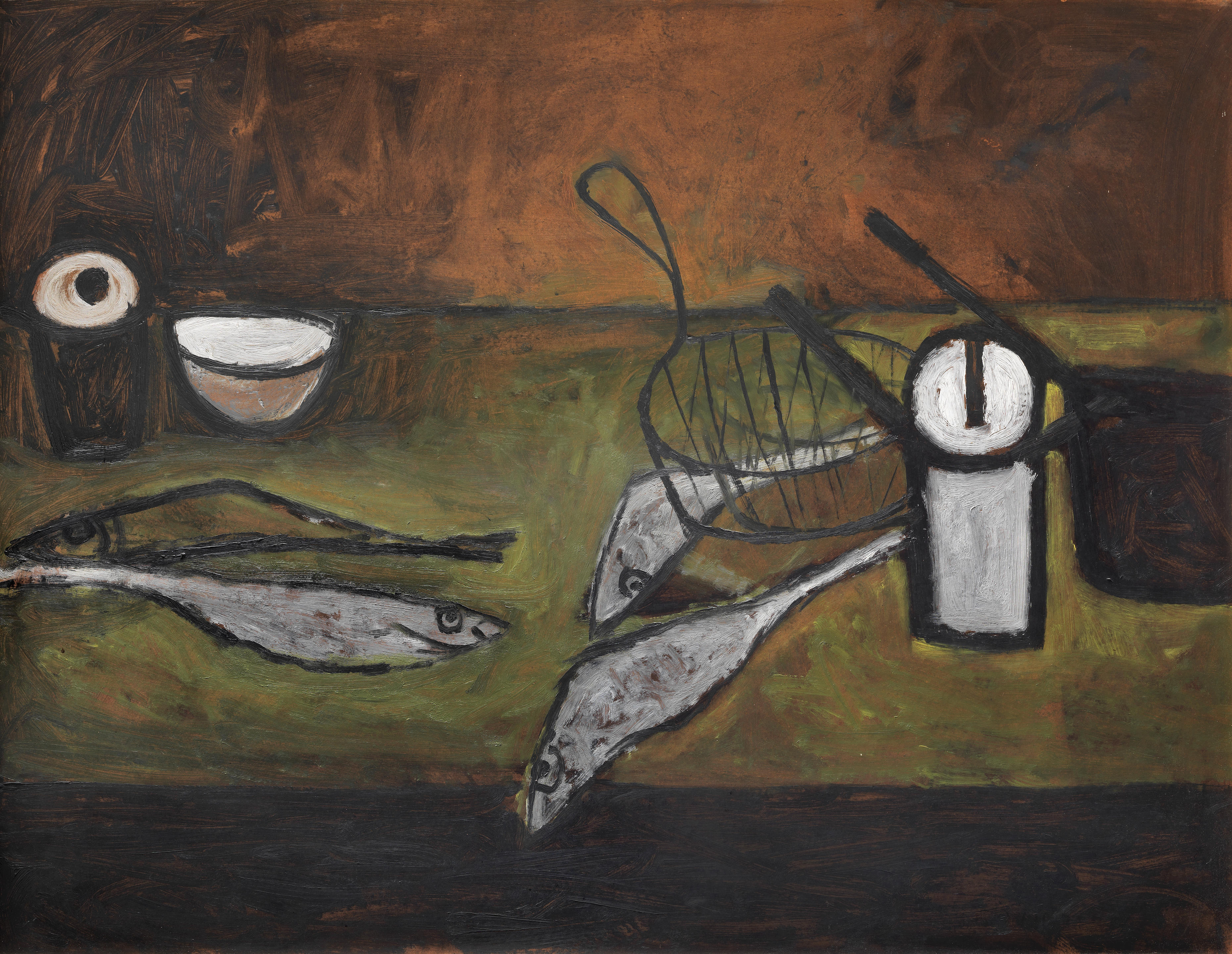 William Scott R.A. (British, 1913-1989) Still Life with Fish signed 'W.SCOTT' (verso) oil on board 77.5 x 100.8 cm. (30 1/2 x 39 5/8 in.) Painted in 1955 Fußnoten Provenance With Hanover Gallery, London, 1963, where acquired by Cyril and June Mardall Literature Mervyn Levy William Scott's Circle and Square, Studio, vol. 164, no.832, August 1962, p.49 (ill.b&w) Alan Bowness, William Scott Paintings, Drawings and Gouaches 1938-1971, Exhibition Catalogue, Tate Gallery, London, 1972, p.73 (ill.b&w) Sarah Whitfield, William Scott Catalogue Raisonné of Oil Paintings 1952-1959 Volume 2, Thames & Hudson, London, in association with the William Scott Foundation, 2013, p.125, cat.no.270 (col.ill & ill.b&w) 'William Scott was the first British painter of significance to get to know the new heroes of American painting, as well as some of its less prominent contributors.' (Norbert Lynton) The mid-1950s was a significant time for William Scott's career. In 1953 he was given his first solo exhibition at the Hanover Gallery in London, and twelve of his paintings travelled to Brazil for the prestigious São Paulo Biennial. This was also the year he visited New York for the first time (following a stint of teaching modern art at Banff School of Fine Arts in Alberta, Canada), and was introduced to the renowned art dealer Martha Jackson by Andrew Ritchie, the Director of MoMA New York, who had seen his Hanover Gallery show. Whilst his stay in New York was not a lengthy one, just under one week, through Jackson he met Mark Rothko and Jackson Pollock among others, and was exposed to the work of Willem de Kooning at his makeshift studio on Long Island. Commenting on this time, William Scott remarked much later in 1972: 'My experience in America gave me a determination to re-paint much that I had left unfinished in terms of the symbolic still life. With the example of Ben Nicholson whom I much admired, there was no reason for me to be devoted solely to abstraction and I embarked on a process of rediscovery.' (William Scott quoted in Sarah Whitfield, William Scott Tate Publishing, London, 2013, p.43). William Scott's painting not only captured the eye of Martha Jackson in New York, the Director of the Solomon R. Guggenheim Museum, James Johnson Sweeney, also evidently admired his work. In his December 1953 exhibition, Younger European Painters, William Scott was the only British representative. A year later, Scott's work appeared alongside Barbara Hepworth sculptures and Francis Bacon paintings in a joint show Martha Jackson staged, titled Three British Artists. The year Still Life with Fish was painted, 1955, proved even more significant for Scott. Four of his canvases - three of which were on a new, much larger scale, drawing on his recent exposure to Contemporary American art – were exhibited in The New Decade show at MoMA New York. Like the present painting, two of these impressive still life works showed a keen interest in firm horizontal divisions, an austere palette and flatness of the picture surface. They lean to varying degrees towards abstraction whilst still retaining recognisable objects: cooking utensils, a fish fryer, saucepans and bowls. Each have in common Scott's penchant for tilting the surface of the table top upwards, cleverly distorting the perspective, a device which he was known to have admired in Cézanne's still life subjects. In Scott's Still Life with Fish the gleaming white saucepan lid on the right hand side echoes the angle of the table top, so that we see the whole of its upper surface. The passion William Scott held for still life can be traced back to some of his earliest recorded works such as Still Life No.1, dated 1935 (sold in these rooms on 15 June 2004, lot 61). His admiration for the French Old Master, Jean Baptiste Simeon Chardin (1699-1779), began during his time spent at the Royal Academy Schools in the early 1930s under the directorship of Sir Walter Russell a man keen to instil firm academic principle 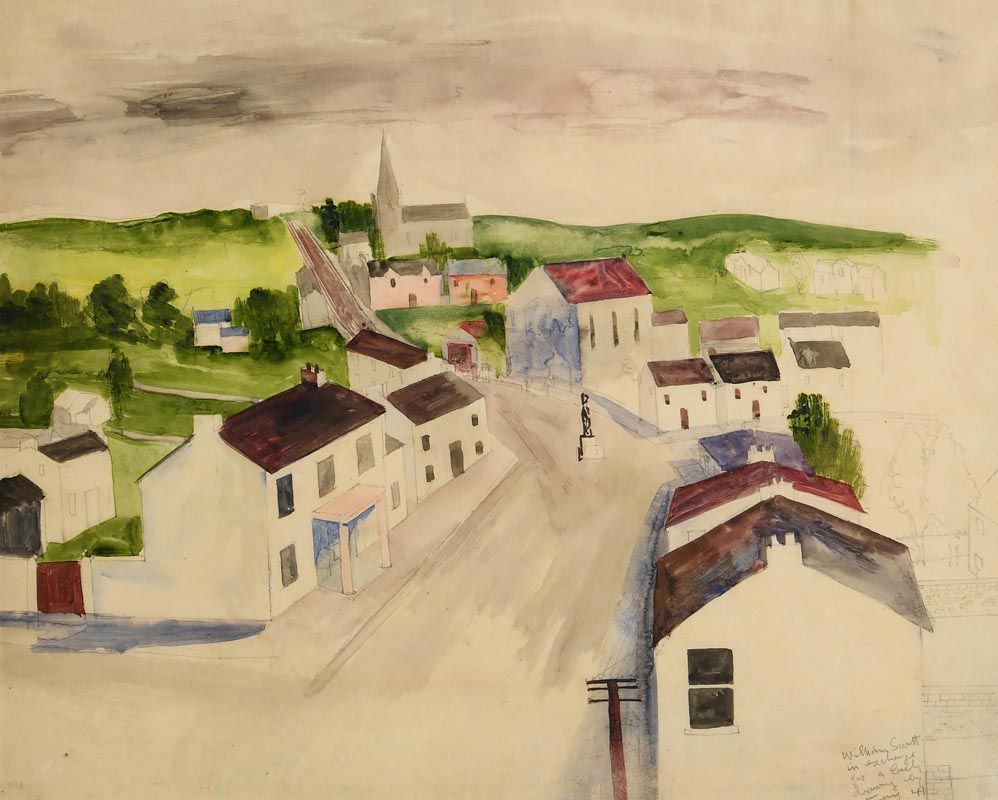 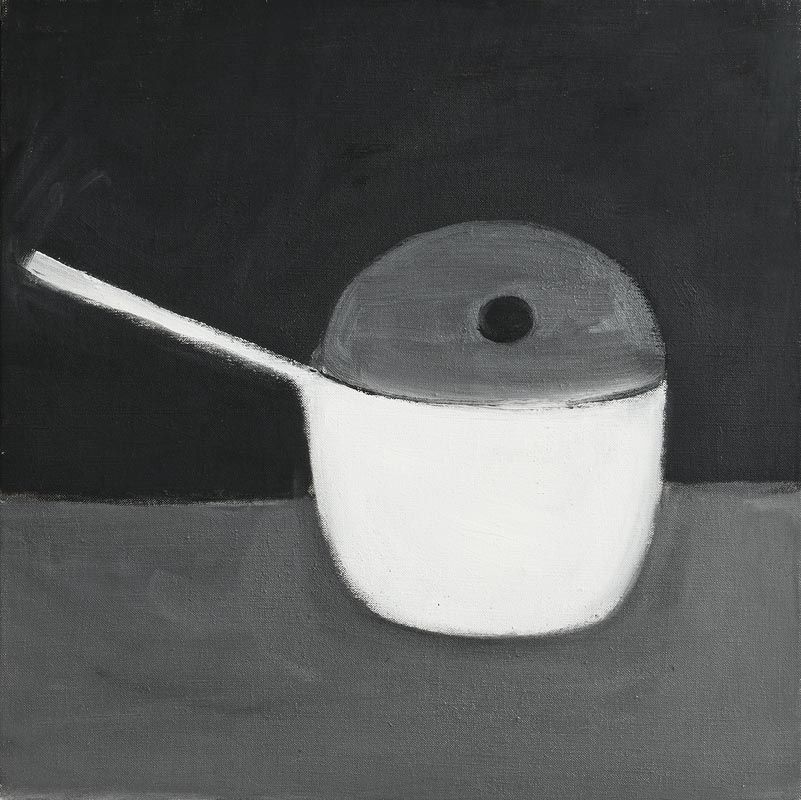 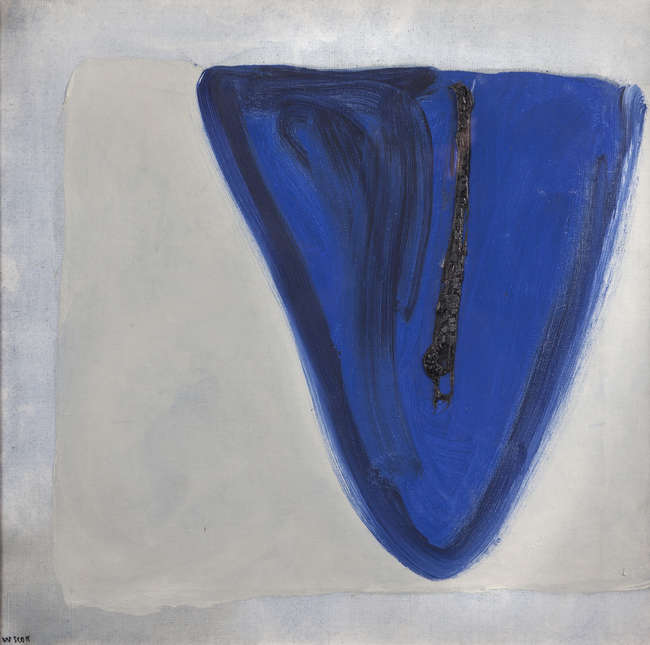 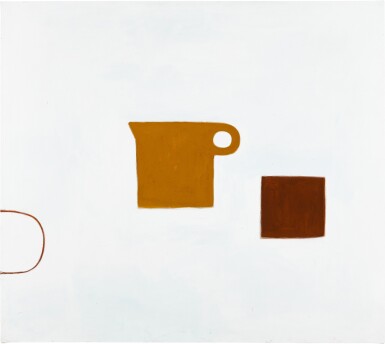 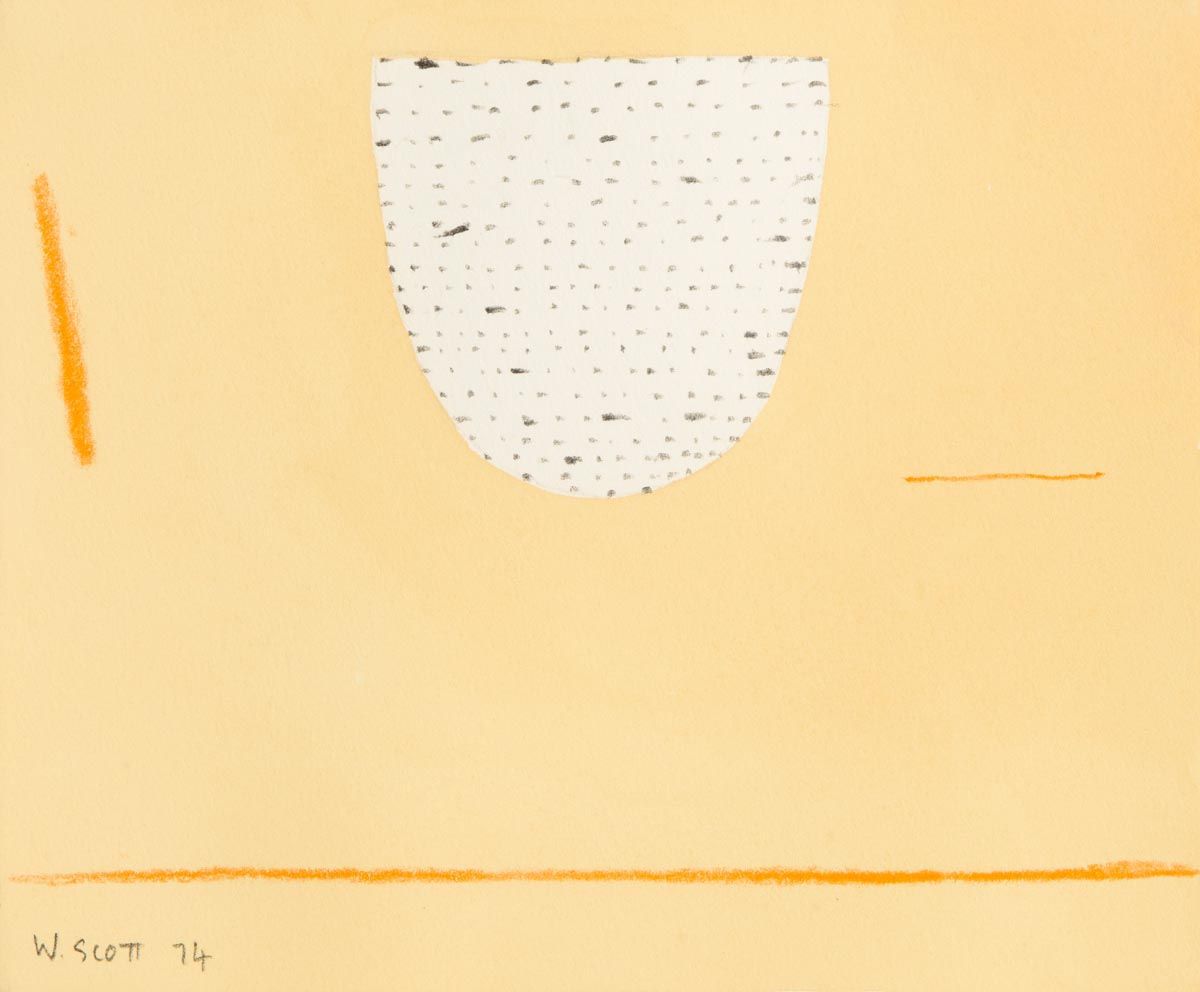 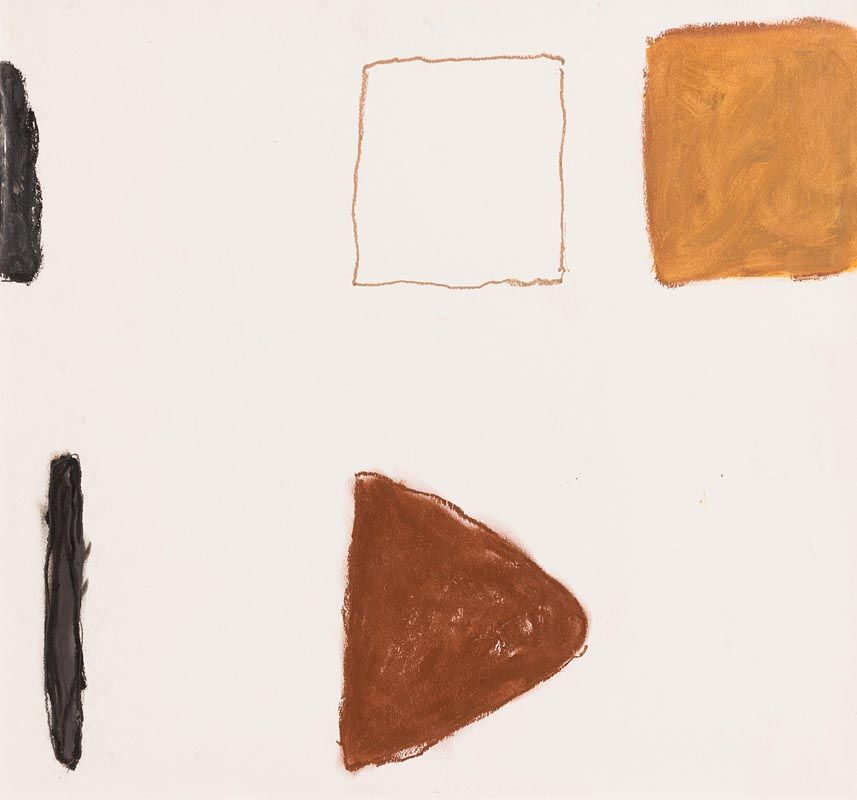 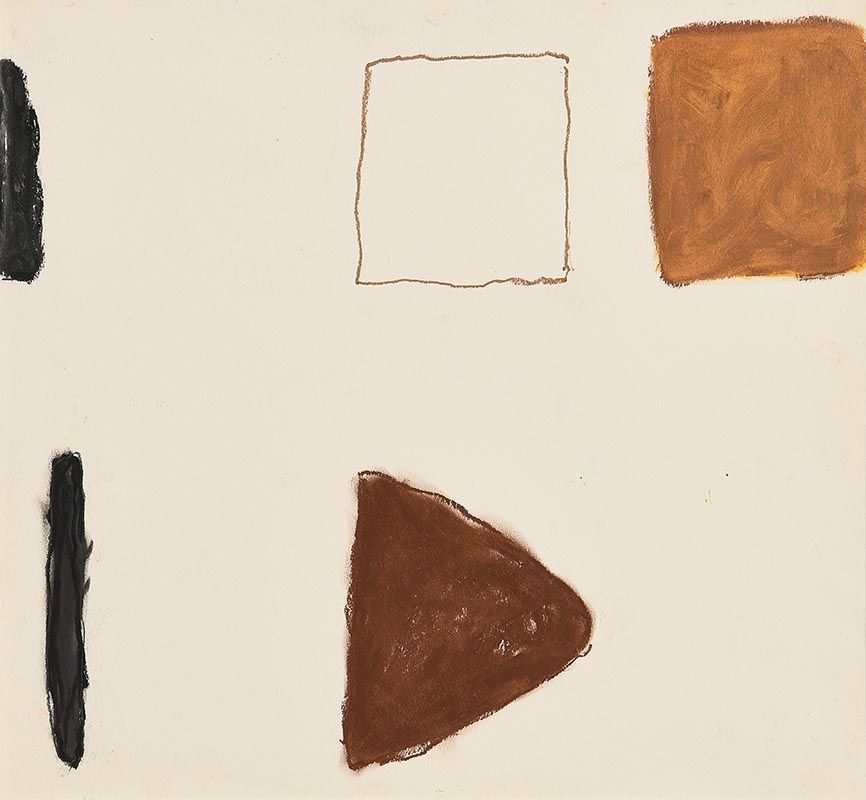 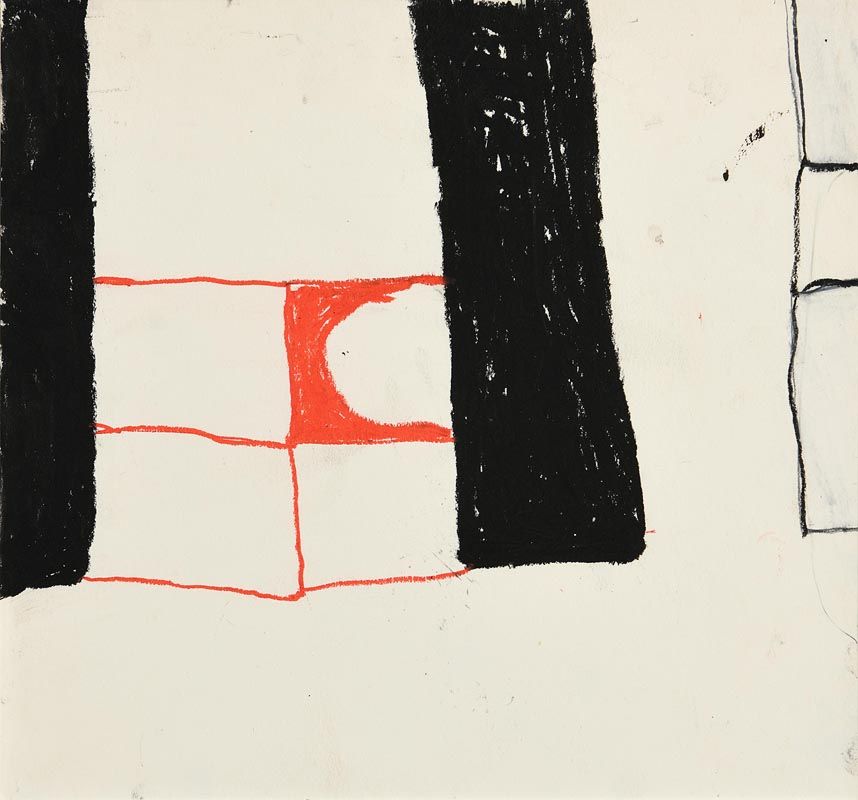