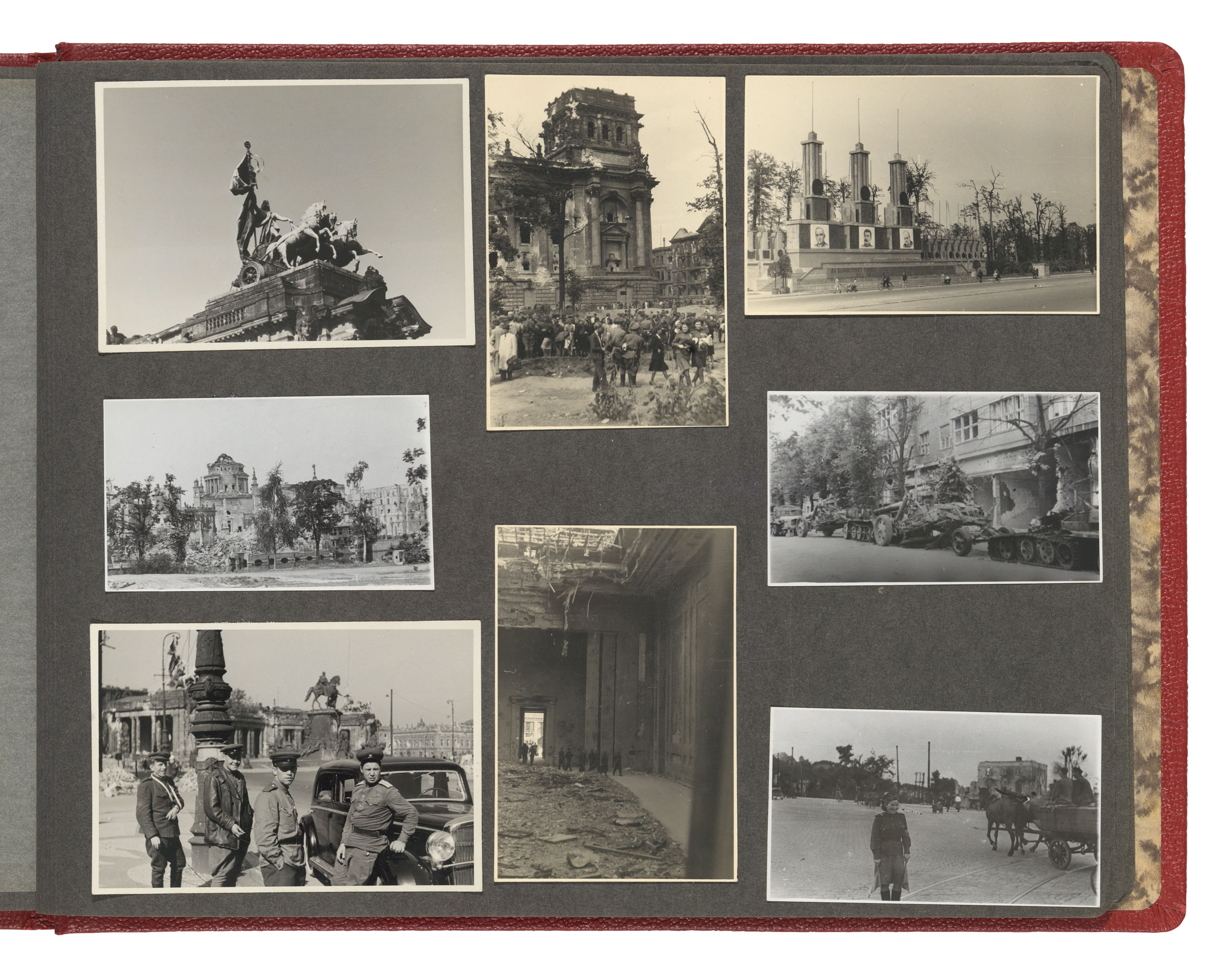 LINDSAY-YOUNG, Lt Col. Evelyn (1893-1986). Photograph album recording the Potsdam Conference, 17 July - 2 August 1945. Rare contemporary photographs of the leaders of the victorious Allies preparing the post-Second World War peace. The photographs show Stalin seated at the conference table with Churchill and Truman, each in chairs with backs that terminate in gilded finials; Atlee, the newly elected British Prime Minister, is relegated to a chair without such decoration. Another image shows Truman shaking hands with Churchill who is characteristically holding a cigar, while a photograph of the British Conference Cabinet shows generals Alan Brooke, Ismay and Gale, as well as Marshal of the Royal Air Force, Charles Portal, sitting at the cabinet table. Known by the British as Operation Terminal, the Potsdam Conference was convened by the Soviet Union, the United Kingdom and the United States of America to thrash out post-war agreements after the unconditional surrender of Germany some nine weeks previously. With Stalin, Truman, Churchill and Atlee in attendance, and backed-up by their respective Foreign Ministers, they divided Germany into four zones of occupation, and defined its territory, reducing the country's land area by about 25% from its 1937 borders; all annexations of foreign territories by the Germans were reversed. The processes of denazification and the establishment of the Nuremberg war crimes trials were enacted. Various peace treaties and memberships of the United Nations were discussed and implemented. It was at this conference that Truman revealed to Stalin that the USA now had a weapon of 'unusual destructive force' i.e. the atom bomb, which the USA intended to use against Japan. Stalin was already fully aware of the existence of the bomb through the infiltration of the Manhattan Project by Soviet spy networks, and although officially neutral in the war against Japan, Stalin advised Truman to 'make good use of [it]'. Lt Col. Lindsay-Young was part of 4 Line of Communication ('LoC') Sub Area, the British unit in charge of the British accommodation at the conference. This is one of his personal albums commemorating the important event. Lindsay-Young's other papers are in the Liddell Hart Centre for Military Archives, King's College London. This archive includes a typescript account by Lindsay-Young of his service with Headquarters, 4 LoC Sub Area, from Lille, France, September 1944, to Berlin, August 1945, as well as various papers relating to the Potsdam Conference, and typescript 'Report on Operation TERMINAL, 12th June-15th August, 1945' by Brig Owen Murton Wales, commanding 4 LoC Sub Area. Oblong folio (230 x 300mm). 12 large photographs (approx. 115 x 118mm or 116 x 158mm) and 21 small photographs (most 76 x 94mm, a few larger and smaller) pasted onto rectoes with facing typescript descriptions, together with other memorabilia from the conference and Berlin, including: British Delegation Pass in Lindsay-Young's name in English and Russian, folding 'Terminal' Pocket Guide map of the Potsdam Delegation Area published for 4 LoC Sub Area with Lindsay-Young's 'Terminal' pass, a second, green 'Terminal' pass, seating plan for Churchill's dinner at the conference 23 July 1945, folding traffic control plan for Potsdam Area at scale of 1:10,000, folding news sheet for 4 LoC Sub Area and one of the unit's Christmas cards (Delegation Pass strengthened by tape, folding traffic control plan lightly spotted and with tears to a few creasefolds and one repaired with tape on verso, a few photos captioned in ink in margins). Original padded red leatherette (extremities faintly rubbed). 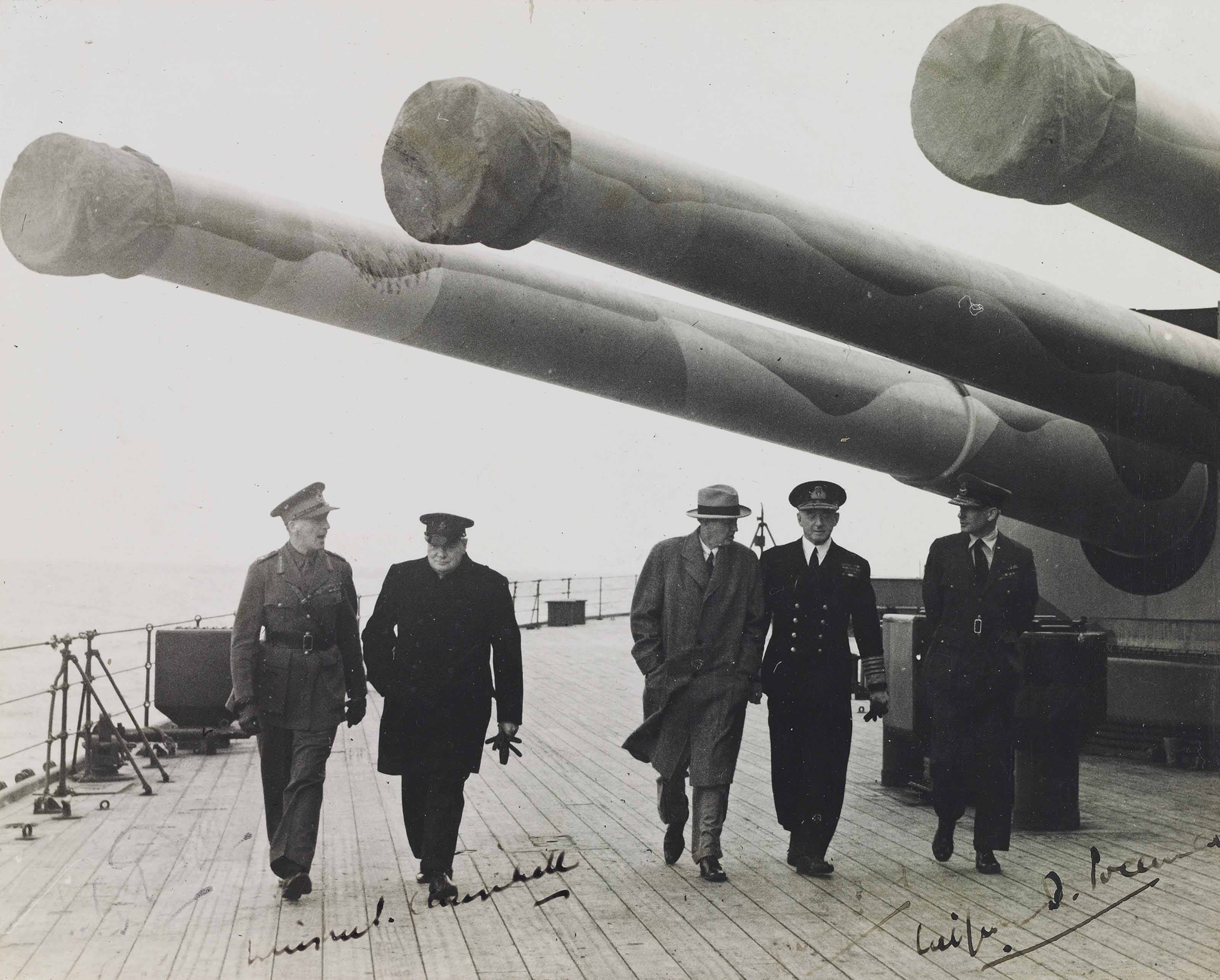