Josephus, Bellum Iudaicum, describing the Jewish war against the Romans in 66-73 AD., in Latin translation, a leaf from a large and tall decorated manuscript on parchment [most probably Low Countries or adjacent northern France, late twelfth or early thirteenth century] single leaf, double column of 52 lines of a small and precise early gothic bookhand, written below topline, three simple red initials with baubels mounted within their tails, line fillers in similar red penstrokes, one 6-line marginalia with red penstrokes with hints of acanthus leaves at midpoints, one natural flaw in bas-de-page, outer vertical edge trimmed with (probably damaged) corner cut away at top, remaining water stains there affecting edges of upper 8 lines of one column of text, else excellent condition, 385 by 225mm. The first-century historian Josephus (more properly in Latin: Titus Flavius Josephus, but born Yosef ben Matityahu) lived and wrote at a pivotal moment in Christian history. He was born in Jerusalem in 37 AD., to a leading Jewish priest and a member of the ruling Hasmonean dynasty, and initially warred against the Roman occupation of Judea in the First Jewish-Roman War, and then alongside the Romans, later being granted Roman citizenship. He met Nero in his early twenties when sent on a diplomatic mission to negotiate the release of Jewish priests, and became an advisor and friend of Titus, serving as translator during the Siege of Jerusalem. He died in 100 AD. He is the chief source, second only to the Bible itself, for the history of Judea during the life of Jesus and in the decades following. He wrote originally in Greek, and his works were translated into Latin for Western readers at various occasions from the fourth century onwards. The leaf here includes the description of the siege of Sepphoris and a Roman camp and the behaviour of the soldiers therein. 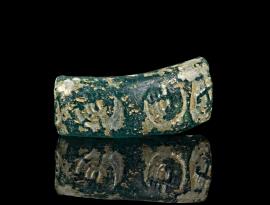