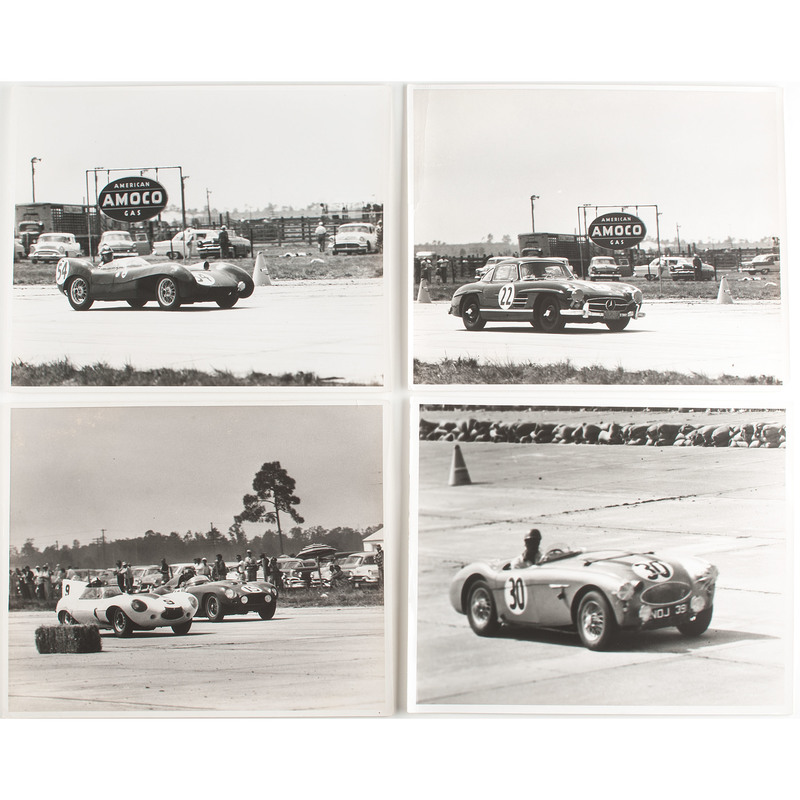 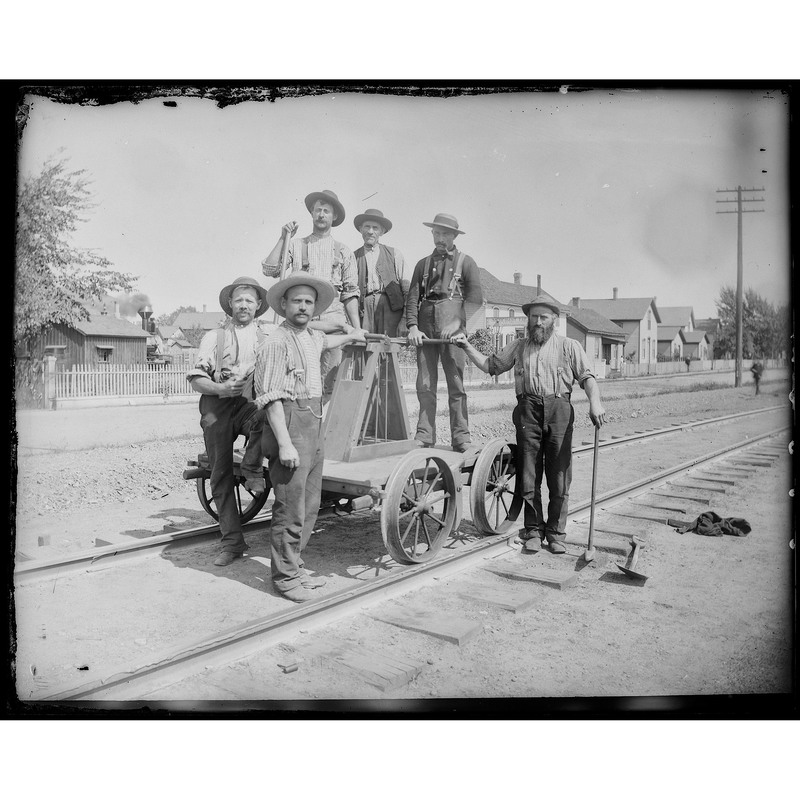 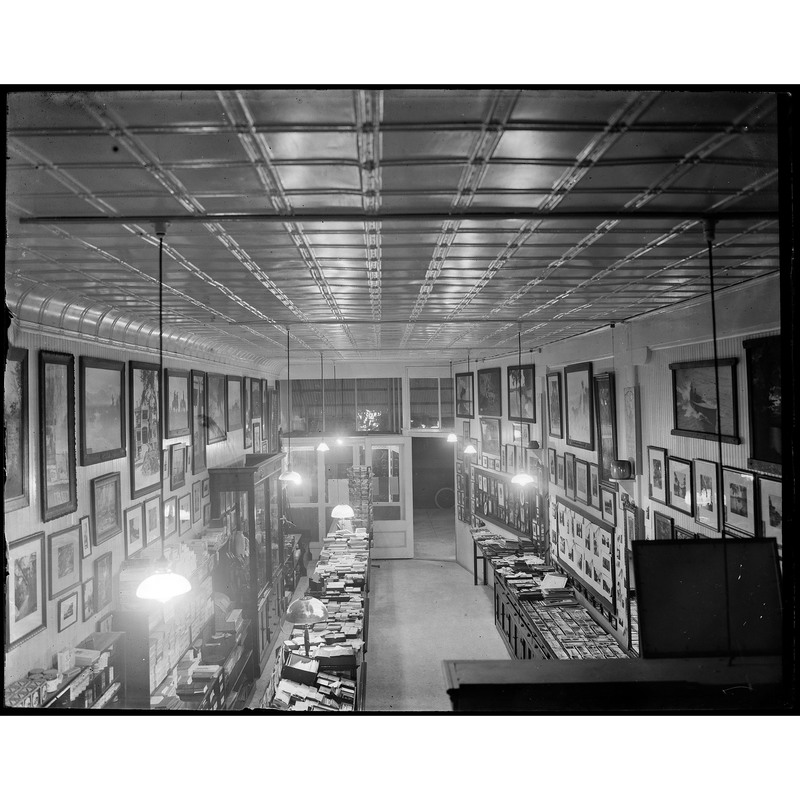 Photographs date back to at least 1910 showing the early automobile attempts at speed records. Drivers include Sir Malcolm Campbell, Barney Oldfield, Frank Lockhart et. al. There are also a few early NASCAR pics when the race was still on the beach. A few aviation photographs including Charles Lindbergh and Ruth Law Oliver as well as railroad negatives of the Lake Shore and Michigan Southern railway are included. Nine 8 x 10 in. glass negatives: 6 guys on and standing by railroad handcart; gentleman in sulky-type cart drawn by one horse; race car with a dozen or so people standing around it, “Fastest auto in the world / Daytona Beach, Fla. / Duesenberg Special”; Lesesne Studio (balcony view of studio covered with framed art and cases; there is also a contact print, different view, of same studio in a folder; locomotive and tender with L.S. & M.S. 487 on tender; 12 guys in wagon drawn by 2 mules, all next to a building (mine?); family in front of a house; plus two that are too damaged to see (one with emulsion peeling). Also two celluloid 8 x 10 negatives that are both broken (one appears to be part of an engine). At least eight 4 x 5 negatives (celluloid) and one 2.5 x 3.5 in. negative. Two 8 x 10 in celluloid negatives, one with contact print. Twenty-five 8 x 10 in. prints Additional detail (these are the same as above): 8 x 10 in. print of “Stutz Black Hawk Special / Made in Indianapolis” on Daytona Beach. Two 3.4 x 10 in. photos of the above car wrecked. One reads “Lockharts car after it turned over and ran into the ocean at a speed of 225 Mi per hr. Coureen Studio, Daytona Beach, Fla.” The other has printed “Wreck of Lockharts Black Hawk Daytona Beach, Fla. This second and the first above both with Lesesne Studio identification. R.H. Lesesne copyright photo may be Lockhart (Frank Lockhart was killed when thrown from his car in Apr. 25, 1928) 6 x 7.75 in. image printed on 8 x 10 photo paper of another vintage race car with over a dozen guys around it. It has “Firestone Tires” on the door, and “My Only Life Insurance” across the motor cover. In felt-tip below is “Barney Oldfield in Christie Front-Drive car in which he campaigned successfully on dirt tracks. Note sign on car.” 5.5 x 9.5 in. image printed on 8 x 10 photo paper, in felt-tip at top “Barney Oldfield and wife on Beach in Lightning Benz 1910 (with “Lightning Benz” on side of car) with Lesesne ID at bottom Two more 8 x 10 in. photos of vintage race cars. The only identification is “Lightning Benz” on one. One image has woman on an early “flying machine”. Labeled in negative “Miss Ruth Law on the Daytona Beach – Fla.” Another image on Daytona Beach with a couple of civilian cars around another unidentified racing vehicle. Folder has 4 x 5 celluloid negative of same. Vintage race car. Coursen written in negative. Manuscript note “Bluebird 276 MPH Mar 7, ‘35”; vintage car, with “8 x 10 glass” upper right (contact print). In negative “Daytona Beach, Fla. Duesenberg Special.” Another note unreadable; later race car, number 54, with Lesesne ID on verso; Mercedes race car no. 22; two cars at a starting line? – Nos. 9 and 15; race car no. 30. Celluloid 4 x 5 negatives: race car with “Maxwell” on side; man standing next to plane (1930s?) on side is “U.S. Army – 0 – 23C / A.C. 32-201” (plus smaller unreadable print). Three manilla folders – First with: 4 x 5 negative of Stutz Black Hawk, 4 8 x 10 prints of Daytona Beach speedway, one print of older car (1910s?) with “Bullet” on side 8 x 10 celluloid negative of car with “Sir Malcolm Campbell Blue Bird Racer Worlds Record 301 M.P.H.” and Lesesne’s ID in negative. Plus 8 x 10 print that may be the same car, but not the same image (with British flag on engine cover) Second folder - 8 x 10 print of shop with ships on the floor along with a few trains, cars, trucks and buses on shelves, and planes hanging from ceiling (contact print) [4 x 5 negative added above], plus contact print of 1920s? race car on beach Third folder – 8 x 10 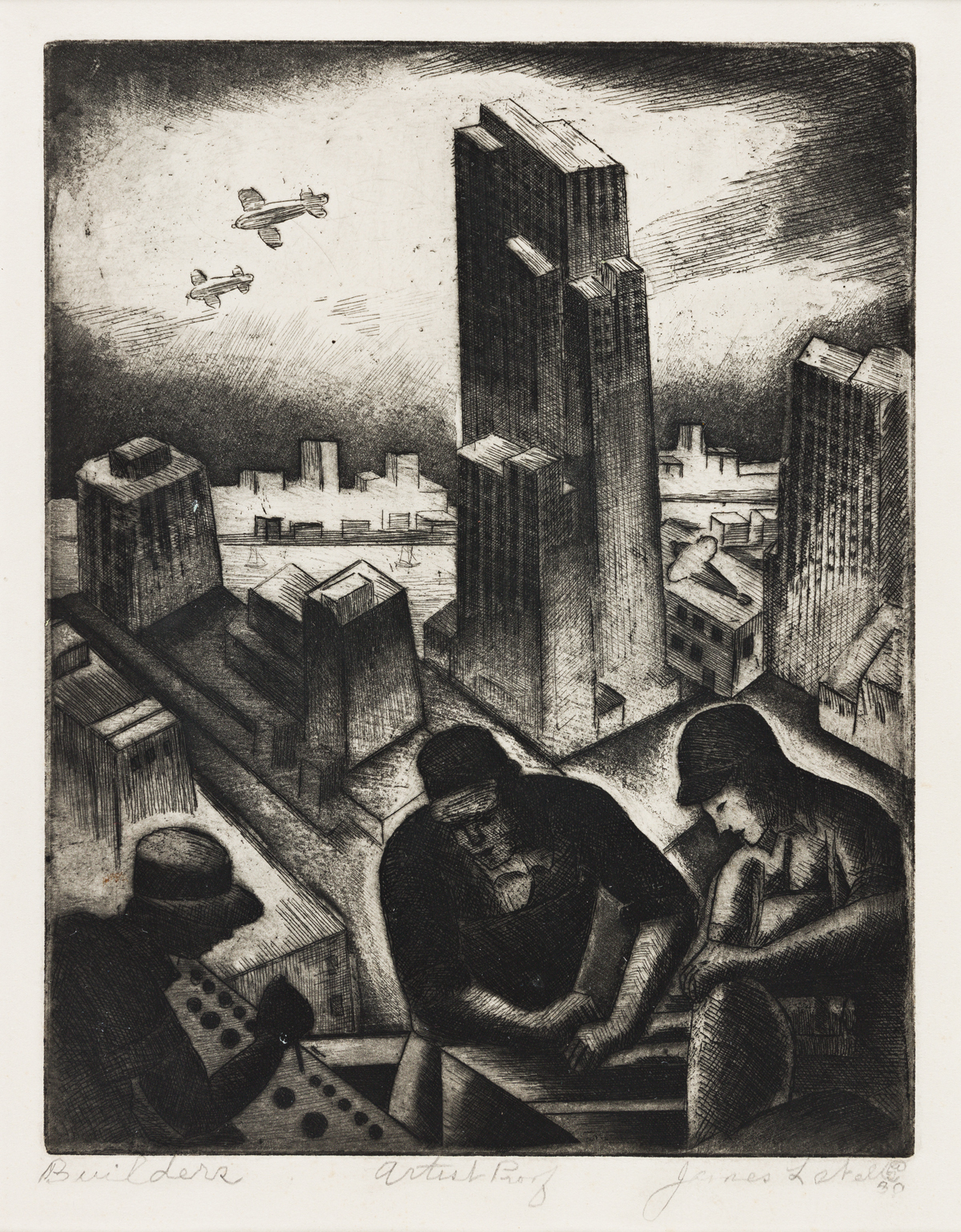