A Louis Vuitton trunk First half 20th century LV monogrammed leather and brass bound, the overall covered in LV stamped fabric, brass corners, the lock stamped Patent Louis Vuitton, 145. New Bond Street, London and 70. Champs Elysées, Paris. and 029505, leather handles on the sides, monogrammed M.L.C, the interior lined with fabric and labelled Louis Vuitton 772808, including original leather belt. H. 56 x W. 61 x D. 49 cm Note: Canvas covered trunks started appearing around 1880, and went into the early 1930's. The canvas, or Duck cloth, was painted to offer some waterproofing, with green being the most widely used color. Trunk latches were not in general use until 1872. The strap, and dowel pin method (a leather strap, and buckle like a belt, and a dowel pin used to keep the lid from shifting side to side) was used prior to 1872, and even a little while after (probably to deplete inventory). The trunk was preceded by caskets which were used in the seventeenth century for exploring the New World and other distant lands. They were crafted from exotic types of wood, reinforced with metal edges and corners and followed simple designs. These caskets marked the beginning of the production of furniture pieces created specifically for travelling. From the 1850’s onwards, travelling equipment became larger and was adjusted for the use of transport on trains and steamships. In the mid nineteenth century, it was Louis Vuitton who began developing trunks with flat lids, thereby replacing the traditional dome top trunks so that the trunks could be piled up. In 1837, at only sixteen years old; Louis Vuitton became a trunk-master. This was a decision that would not only change his own life but the lives of his sons and future generations. He arrived in Paris by foot and found an apprenticeship working in Monsieur Maréchal’s atelier; which designed custom made boxes and trunks. At the time, horse-drawn carriages, boats and trains were the main modes of transportation, and travellers’ baggage was handled roughly. Travellers therefore called upon craftsmen to pack and protect their individual objects. Vuitton quickly became a valued craftsman at Maréchal’s Parisian atelier and worked there for 17 years before leaving to open his own workshop at 4 Rue Neuve-des-Capucines near the Place Vendome in Paris. In 1859, the company and Vuitton family moved to Asnières-sur-Seine, a location that has since functioned as both a family residence and the cradle of the company. This new location was the result of increased demand to expand his operations due to Vuitton’s enormous success. His original workshop, northeast of the centre of Paris, began with 20 employees. By 1900, there were nearly 100 people working for Vuitton and by 1914 there were 225. The original atelier has expanded throughout the decades, including the addition of the Vuitton family residence, and there are still products crafted there today. The family home in Asnières has been preserved to form part of a private museum and there are still 170 craftsmen working in the workshop; fulfilling special orders for clients around the world. In the late nineteenth century, travellers would carry all their essentials inside wardrobes and flat trunks; which often attracted burglars. Although master trunk maker Louis Vuitton sought to help his clients protect the goods inside their travel pieces; it was his son Georges Vuitton who revolutionized luggage locks in 1886. Georges developed a single lock system with two spring buckles; an ingenious closing system that turned travel trunks into real treasure chests. After several years of working on this lock, George patented his revolutionary system. It was so effective that he challenged Harry Houdini, the great American escape artist, attempted to escape from a Vuitton box and lock. However, Houdini did not rise to the challenge, therefore the lock’s effectiveness is indisputable and is still used today.

A LARGE LOUIS VUITTON TRUNK ON A MAHOGAN

A Louis Vuitton trunk covered in beige a

A Louis Vuitton trunk covered in beige a 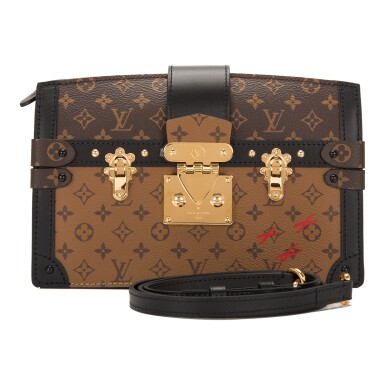 A Louis Vuitton trunk bound in leather a

A LOUIS VUITTON TRUNK MADE FOR ENCYCLOPE