AMERICAN REVOLUTION SOUTH CAROLINA]. A collection of six documents pertaining to Continental troops in South Carolina, including: WARLEY, Joseph. Captain . Manuscript document signed, Charleston, 28 February 1778. 1½ pages, folio, rough edges, evidence of tape repairs . The muster sheet for Warley's company of the 3rd Regiment of South Carolina Continental Troops with names of officers and men listed in a column along the left margin. Other columns are included for enlistment time, time of service (almost all three years), and remarks on current status. -- BEEKMAN, Barnard. Lieutenant Colonel . Autograph document signed, [Charleston], 18 October 1778. 1½ pages, folio, remnants of early tape repairs . An account of "Ordnance & Stores necessary to be provided for the Artillery Regim t ." prepared by its commander, Barnard Beekman. The document likely pertains to the 5th South Carolina Artillery Regiment, which was composed, according to the account, of 4 cannons, but was desirous of obtaining 11 more including: 1 six pounder, 8 four pounders and 2 two pounders. A neatly drawn detailed list, organized in two columns, addresses every need of the regiment from 20 handspikes to 20 dressed sheep skins. On the back, Beekman has listed the current supplies of the regiment, giving evidence that his requests for increase were substantial. -- DRAYTON, Stephen. Deputy Quartermaster General . Two autograph documents signed, Charleston, 5 December and 15 December 1778. Together 2 pages, oblong 4to and 4to. Two documents pertaining to transportation at Charleston: "A Return of Waggons, Carts, Horses & Geers in the Confederal Army In the State of S. Carolina" and a "Return of Carpenters engaged in Continental service for building Batteaus" which includes a list of eight names. -- VALENTINE, William. Deputy Commissary General . Autograph document signed, Charleston, 8 December 1778. 1 page, 4to. "A Report of Stores etc. on hand in the Dep y Com y Gen l s department belonging to the Hon b le the Continental Congress." -- ROBERTS, Owen. Colonel . Manuscript document signed, Purisburgh, 22 February 1779. 1 page, oblong 4to . The weekly return for the "South Carolina Continental Corps of Artillery" comprising a neatly drawn table which lists the number of individuals of each rank and position within each company of the corps. Together six items . (6) 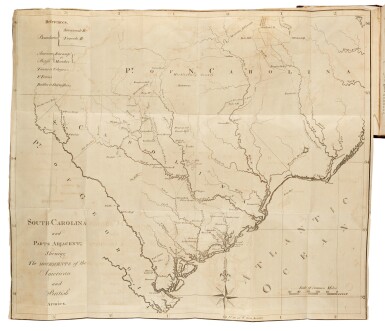 David Ramsay | The History of the Revolu

RAMSAY, David. - The History of the Amer The History of the American Revolution Ramsay's History of the American Revolut

UNITED STATES. - Report of the Committee