AN APOSTLE. Leaf from an ILLUMINATED BOOK OF HOURS ON VELLUM.

AN APOSTLE. Leaf from an ILLUMINATED BOOK OF HOURS ON VELLUM. [England, second half of the 14th century] 195 x 130mm. Full-page miniature (153 x 92mm) divided into two registers: in the upper, a bearded saint holding a book and a club (?), wearing a grey robe and a red mantle lined in pink, his halo and book of liquid gold, against a tesselated background in burnished gold and red, pink, and blue with white tracery; in the lower register, a similar tesselated pattern in paler shades of the same colours, with different tracery; the whole within a rectangular frame of burnished gold and red and blue with white tracery, with extensions of ivy leaves and buds on black hairline stems; in the corners four coats of arms: (1) argent a cross gules , (2) argent a lion rampant erminite between three crosses fitchy sable , (3) gules , and (4) sable a lion passant gardant argent armed gules and in chief or four lozenges. (Some abrasion and loss of gold, the argent and gules oxidized and darkened; not examined out of frame.) Framed and glazed. PROVENANCE: This leaf comes from a Book of Hours, use of Sarum, that had 129 leaves and 32 full-page miniatures when it was catalogued by Bernard Quaritch in 1931 ( A Catalogue of Illuminated and other Manuscripts, Together with Some Works on Palaeography , London, 1931, no.56). In the full manuscript, borders surrounding several of the miniatures contained the letters "k, n, e, y, f, t", which have been taken to signify the initial letters of a motto or a form of the name Knyvett. On one flyleaf of the codex was found the inscription: "Thys is mystrys marys boke. G."; and on another, "Marset Alouf: A mon poer ie voil voo pleser". Of the five coats of arms found in the original manuscript, four appear on this leaf. When the codex was described by Quaritch in 1931 the bookplate of Thomas Boycott, 1761, as well as panels from a 16th-century English binding, were preserved in the binding by Rivière. The complete codex was sold by Quaritch in 1941 to H.P. Kraus, who sold it to Rudolph Wien. In 1948 two leaves appeared at auction at Sotheby's (9 February 1948, lot 215, a bifolium identified as St. Matthias?, and lot 216, St. Margaret). The bifolium, now identified as St. Bartholomew, subsequently entered the collection of Sir John Pope Hennessy (sold Christie's New York, 10 January 1996, lot 4). In 1956 Kraus offered five of the individual miniatures (cat. 80, no.16: Sts. Nicholas, Thomas of Canterbury, Helena, Mary Magdelen and Lazarus, and Edmund). The miniature of St. Saturninus was purchased from Wien by Eric Korner in 1952 and sold at Sotheby's London with Korner's collection (19 June 1990, lot 32); it is now in the collection of Bernard Breslauer (W.M. Voelkle and Roger Wieck, The Bernard H. Breslauer Collection of Manuscript Illuminations , New York, 1992, no.17). The miniature of St. Nicholas was sold at Sotheby's London (21 June 1994, lot 25) and was subsequently offered, together with the miniature of St. Barnabas, by Bruce Ferrini (cat. 3, nos 18 and 19). Two miniatures are at the Los Angeles County Museum of Art (Sts Andrew and Thomas), two in a private New York collection (St. Edmund and the Raising of Lazarus), and two at the John and Mable Ringling Museum at Sarasota, Florida (Sts James and Matthew). ILLUMINATION AND TEXT: This miniature of an apostle was probably intended to accompany a suffrage. The highly unusual composition of the miniature, which is also characteristic of the others from the same manuscript, has called forth several possible explanations: that the figures were copied to size from a pattern book offering designs too small for the space available, that the lower register was meant to represent a floor, or that the pictures were executed first and the lower half of the page was intended for the text. The last possibility is excluded by the fact that on the miniature of St. Bartholomew the instructions to the illuminator are visible under the pattern covering the lower p

AN APOSTLE, historiated initial "E", on

THE ASSUMPTION OF THE VIRGIN, historiate

APOSTLE, HISTORIATED INITIAL ON A SINGLE 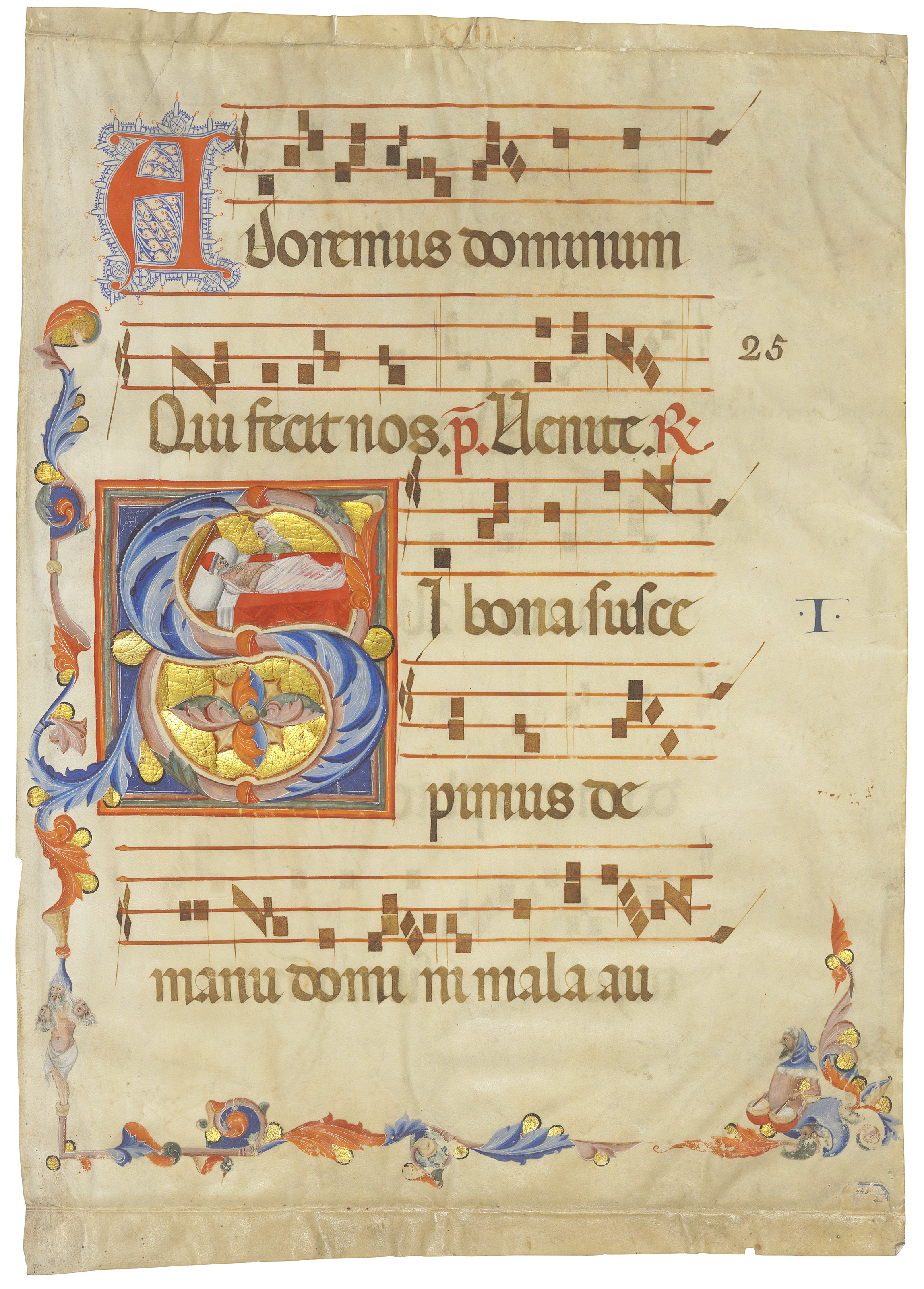 COLLECTION OF LEAVES FROM ROMANESQUE MAN Large leaf with the Nishmat (a prayer), 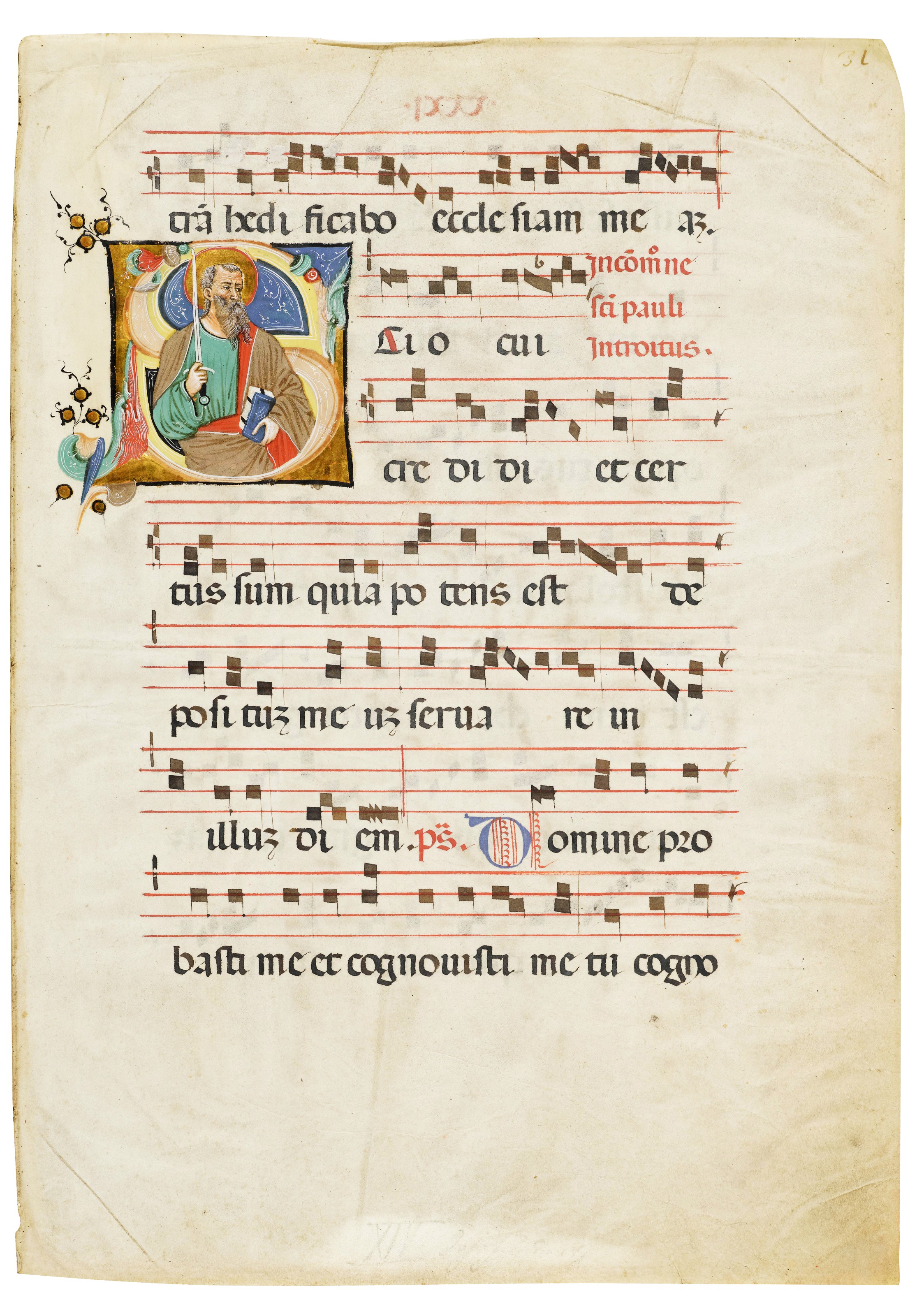