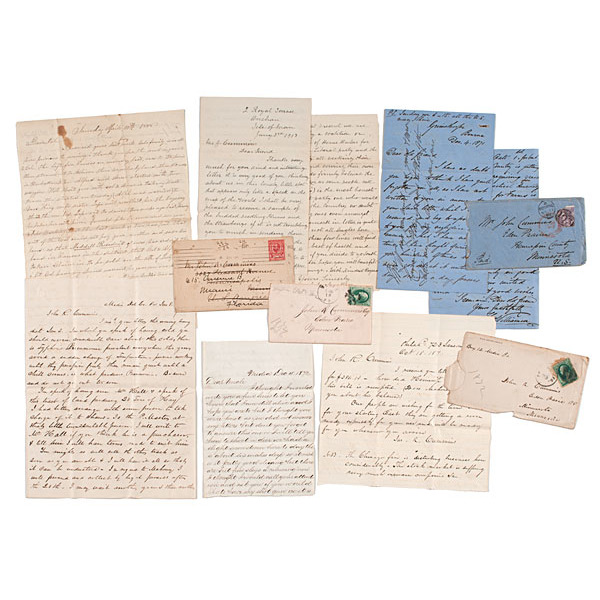 56 items, approx. 75 envelopes. A scientific approach to agriculture took hold in the United States during the late antebellum years, propelled equally by the results of the first widespread empirical research and by the establishment of organizations to nurture new scientific ideas. George Cummins and his son John R. Cummins were among the pioneers helping to transform the United States from a nation of small freehold farmers into the most productive agricultural nation on earth. From his home in Roseville, Delaware County, PA, George Cummins emerged in the 1830s as a prominent supporter of the new agriculture, pushing the newly founded Delaware County Institute of Science to take an interest in crops. Amid letters relating to financial matters, estates, and real property (many under the advice of famed Philadelphia attorney W.J. Duane) the Cummins collection includes a fascinating series of letters relating to his support of the early Institute and its role in investigating soil preparation, liming, fertilization, labor, and other hot topics of the day. Among the most historically valuable items in the collection is a letter from the philanthropist Lamar Ronaldson to George Cummins, Mar. 22, 1838, cheering the new day in which science and rationality would prevail: It is remarkable that you farmers are not much men of business, and generally hate writing; but there is now abroad a manifest spirit for improvement amongst them, in the great and important business of agriculture...Also included are letters from James Ronaldson detailing his early experimentation with sugar beets in 1836 (You are requested to loose no time in handing the Beet seed to some of the managers [of the Institute], who will please to give you a spoonfull of the seed if you wish to have it, but recollect that though sugar is in the Beet skill and intelligence is essential to taking it out) and his gift of land to the Institute for agricultural experimentation. Just as significant is an interesting, though worn, printed circular letter signed in manuscript by Ronaldson regarding experiments using brine with wheat, 1837. In another register is a long and touching letter of fraternal advice from James Cummins to his brother John, 1851, as John was setting out into the world: the business we are now in has many hidden pitfalls and temptations when we know such is the case let us beware, fire and water are useful elements but very dangerous masters when they get beyond our control. If we keep them in their proper place they are useful such is the case with many things we have for our use. An educated man is an ornament to society a useful member, the noblest work of our creator such I hope may be your aspiration to become an educated man and an honest one. The latter I know your dear father was, or he would not have rec’d the esteem of the one who favoured him... In 1856, John and his wife Martha (“Mattie”) emigrated to Eden Prairie, MN, where he became a wheat rancher, and noted horticulturist. Like his father, he set his hopes for promoting agriculture on building a strong institutional base, becoming a founder and stalwart of the Minnesota Horticultural Society. Similar to his father, John’s correspondence reflects his efforts on behalf of modern agrotechnologies, though his concerns reflect those of the next generation. The Englishman Thomas Williamson, for example, writes from Bourne, Mar. 9, 1877, offering an early glimpse of the impact of globalization Farmers here are having hard times, the important of Wheat Corn &c and Meat, has materially affected us, being heavily rented and rated, and labour higher, it takes a good farm and well managed to pay its way, consequently there are lots of farms to let and the owners are taking less rents, so everything will find its level. It is steam which has made this change and brought all countries nearer and more on a level -- raised the value with you and lowered the value of land with us... One other letter of