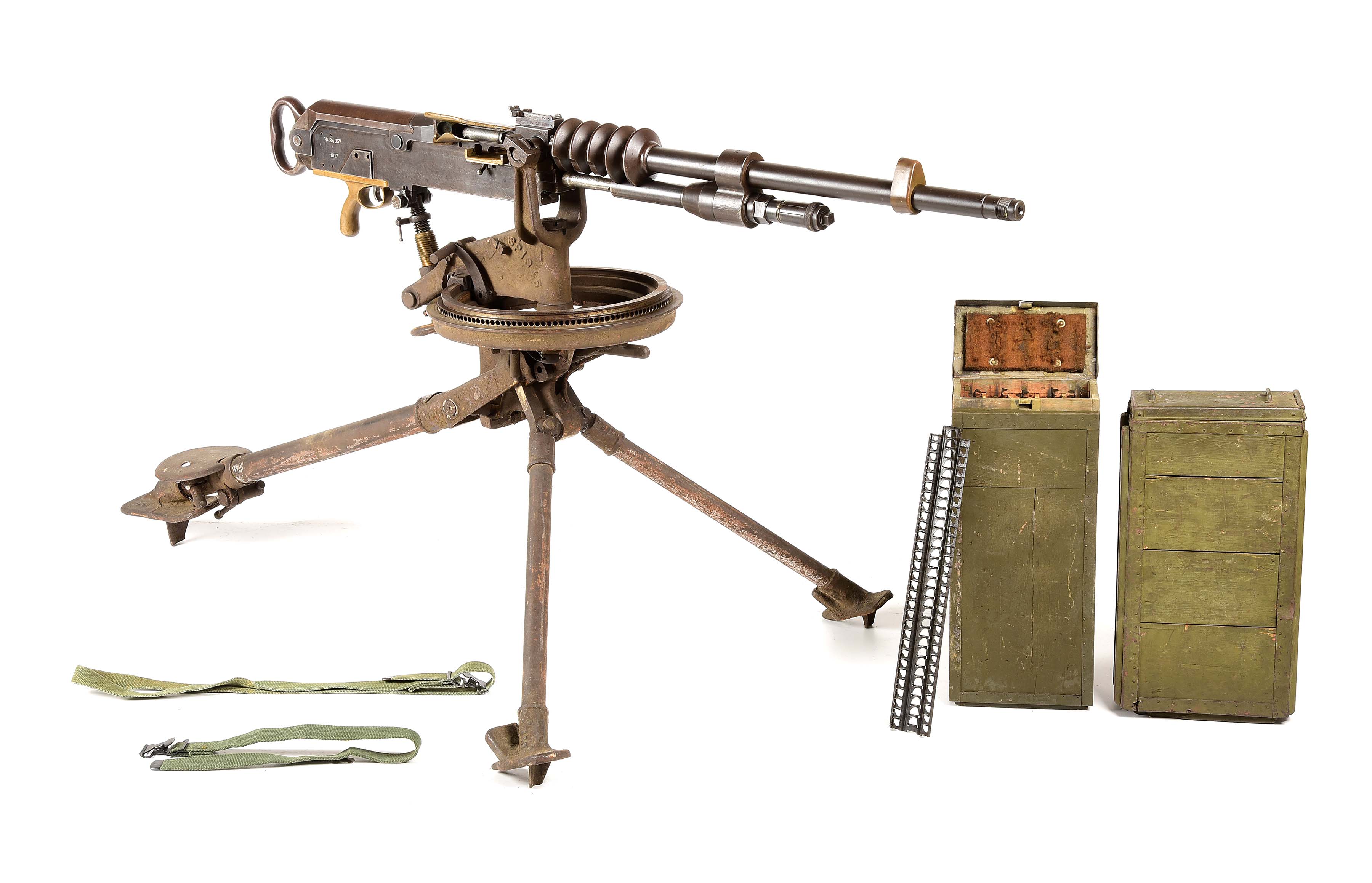 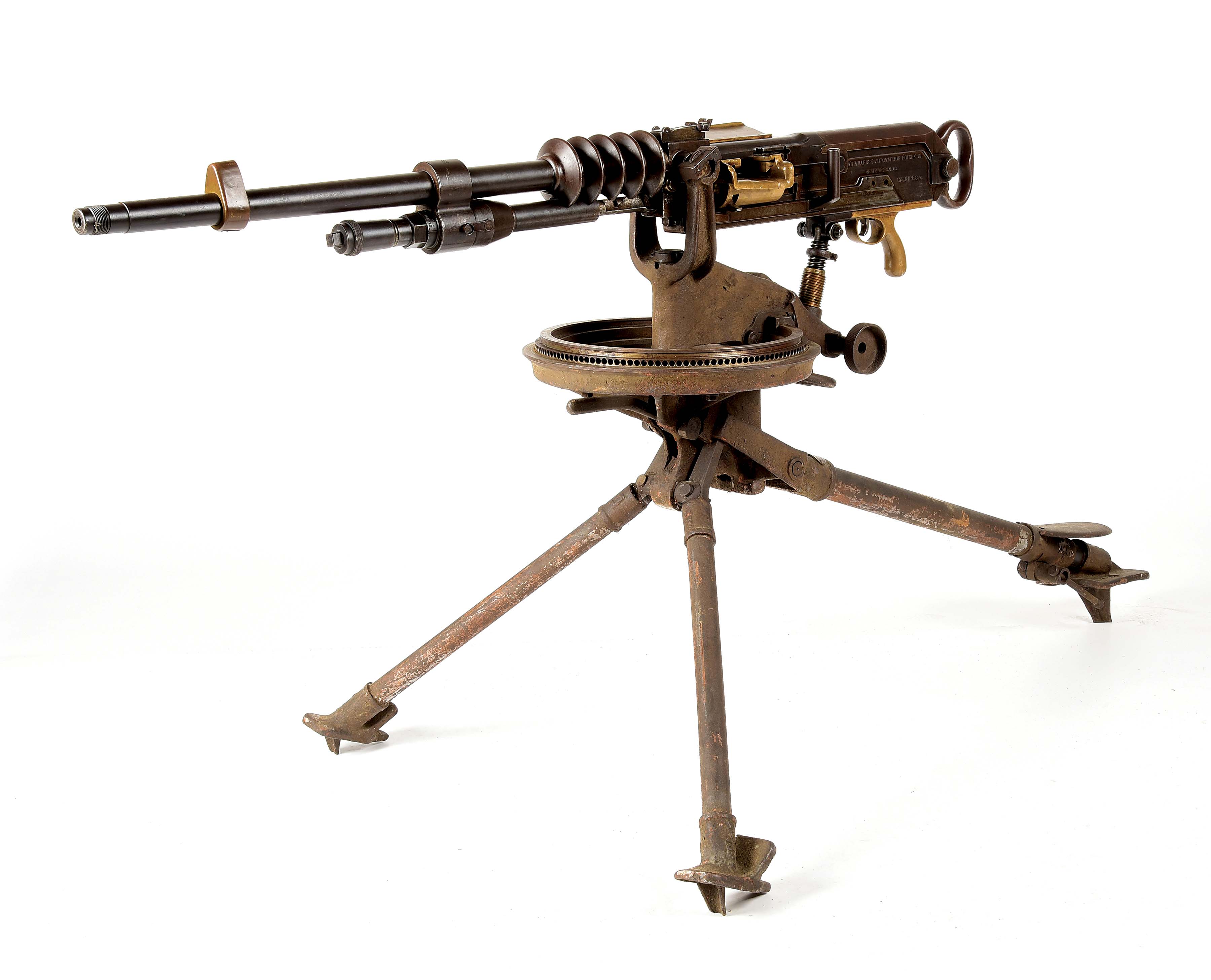 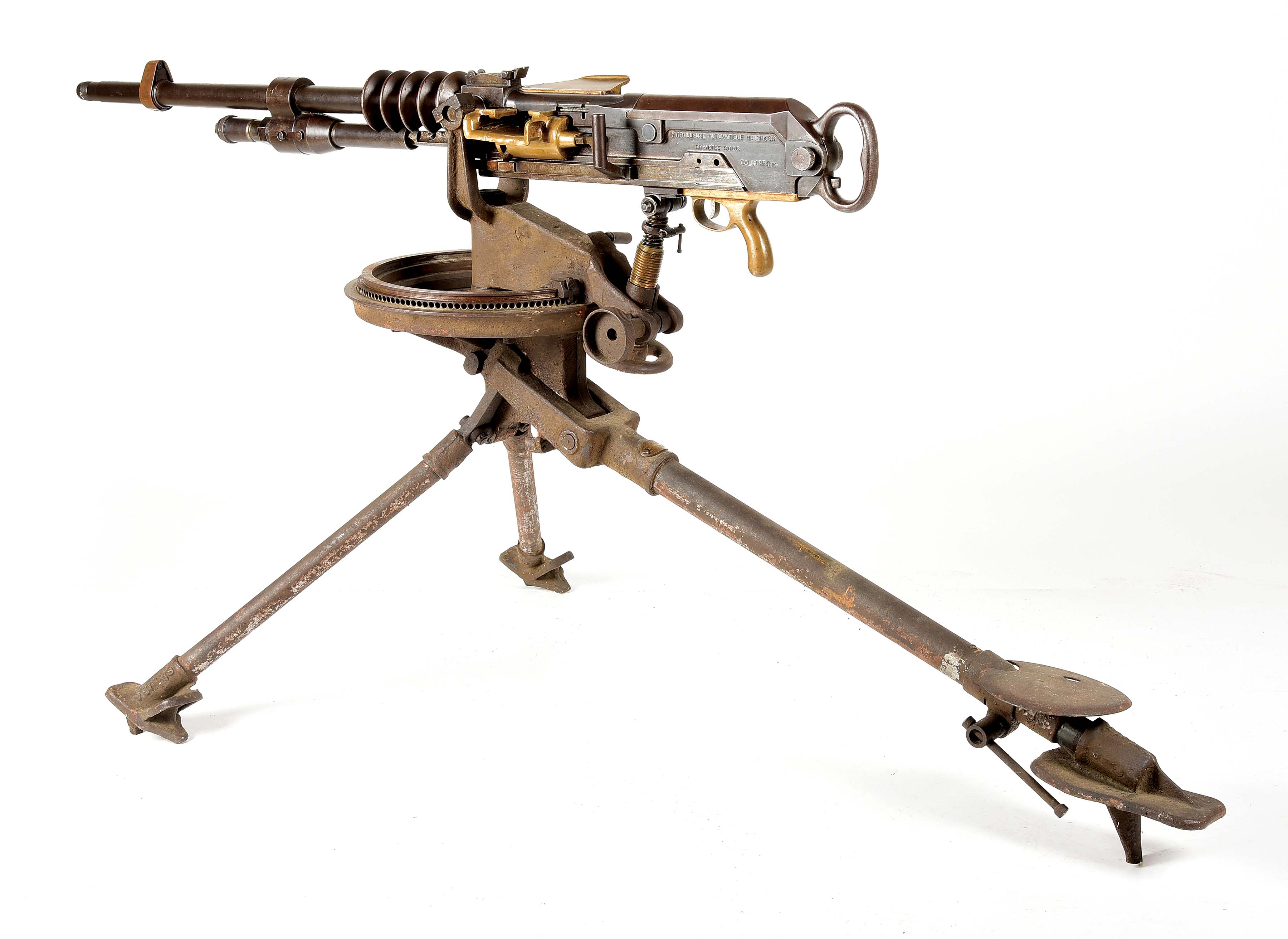 Fine collectible World War I French model 1914 Hotchkiss machine gun in original 8mm Lebel on an original “The U.S. Standard Parts Co” model of 1916 ground mount. Otherwise referred to as the “Cleveland Mount” by longtime machine gun collectors and enthusiasts. Only about 2,500 of these mounts were manufactured and most were scrapped many years ago. This Hotchkiss is dated “1917” on right side of receiver below serial number, and marked “MITRAILLEUSE AUTOMATIQUE HOTCHKISS / BREVETEE S.G.D.G. / CALIBRE 8 M/M” on left side of receiver. Extractor, extractor spring, and firing pin are not present within the bolt. One tripod lock plate not present. Bolt has been lightly deactivated by “just-a-touch” of a welding torch at the top near the face without damaging the face. This does not in any way affect the smoothness in which the bolt moves within the action. Barrel is mismatched. Brass feed block matches #M24857 as does handgrip. This gun's sight is marked for "D" ammunition which indicates it was probably a World War I bring-back gun and was never retrofitted for the later N-type ammunition. This model incorporates an attractive brass pistol grip and steel backplate handle for traversing this gun on its mount. Also included are 12 8mm Lebel feed strips within two original wooden feed strip boxes, and 12 steel feed strips with N-type red annulus primer ammunition. Also included are two spare triggers with springs and what appears to be an aluminum former “plug” to the barrel. Attachment pin between tripod head and gun is a professionally made replacement. Electronic NFA registry indicates “HOTCHKISS” as the manufacturer. CONDITION: Overall finish and appearance is fine original smooth blue finish turning to a grey-brown patina with some areas of scattered light pitting. Operating piston and bolt in the white with mottled brown patina. Brass handgrip very attractive. Right side of ejection port tray bottom slightly turned upward. Cleveland mount in good condition in original paint with significant scale, but would likely clean up well. Bore of gun is very fine with strong shiny rifling turning dark in the grooves. Bolt face fine. Action is smooth and positive. This is a full-auto only machine gun. This is an attractive package For the World War machine gun collector/enthusiast. With appropriate parts and a little work this could be restored to a firing condition. The advent of availability of boxer primed 8mm Lebel ammunition has breathed new life into this venerable and incredibly accurate machine gun model. The French Model 1914 Hotchkiss machine gun is an extremely durable design and was used by both the French and U.S. forces during World War I. The heavy cooling rings on the barrel are an instantly recognizable trademark. These are great, steady firing guns. THIS IS A NATIONAL FIREARMS ACT ITEM AND REQUIRES BATF APPROVAL PRIOR TO TRANSFER. THIS ITEM IS FULLY TRANSFERABLE ON AN ATF FORM 3 OR 4 AS CURIO AND RELIC ELIGIBLE. JWK 2021-11-046 Name Value Accessories Tripod, 2 feed strip boxes, 12 feed strips, two triggers with springs and aluminum plug Barrel Length 31" Caliber/Bore 8mm Lebel FFL Status NFA Manufacturer Hotchkiss Model 1914 Paperwork Sear Serial Number Serial Number 24857 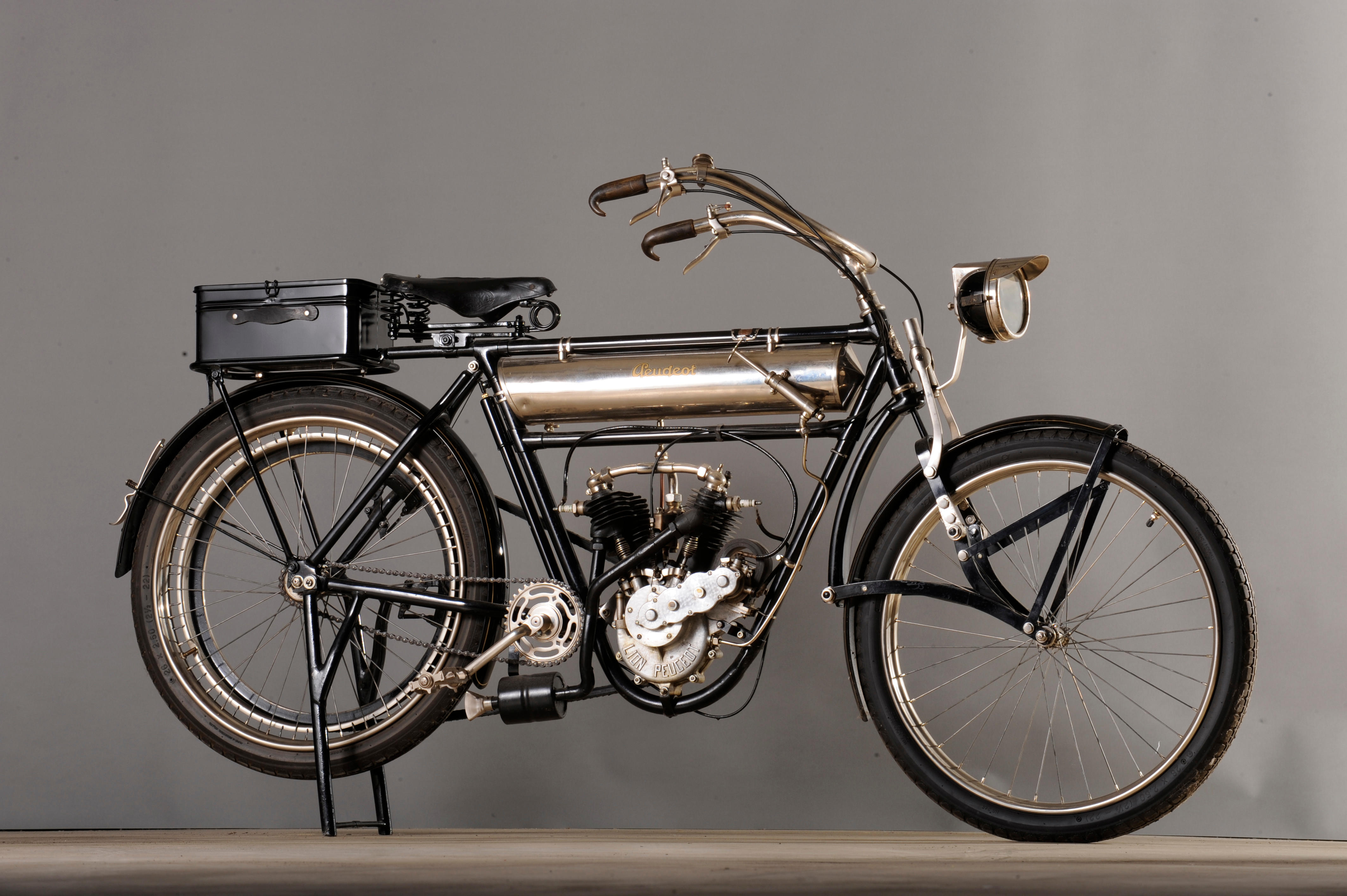 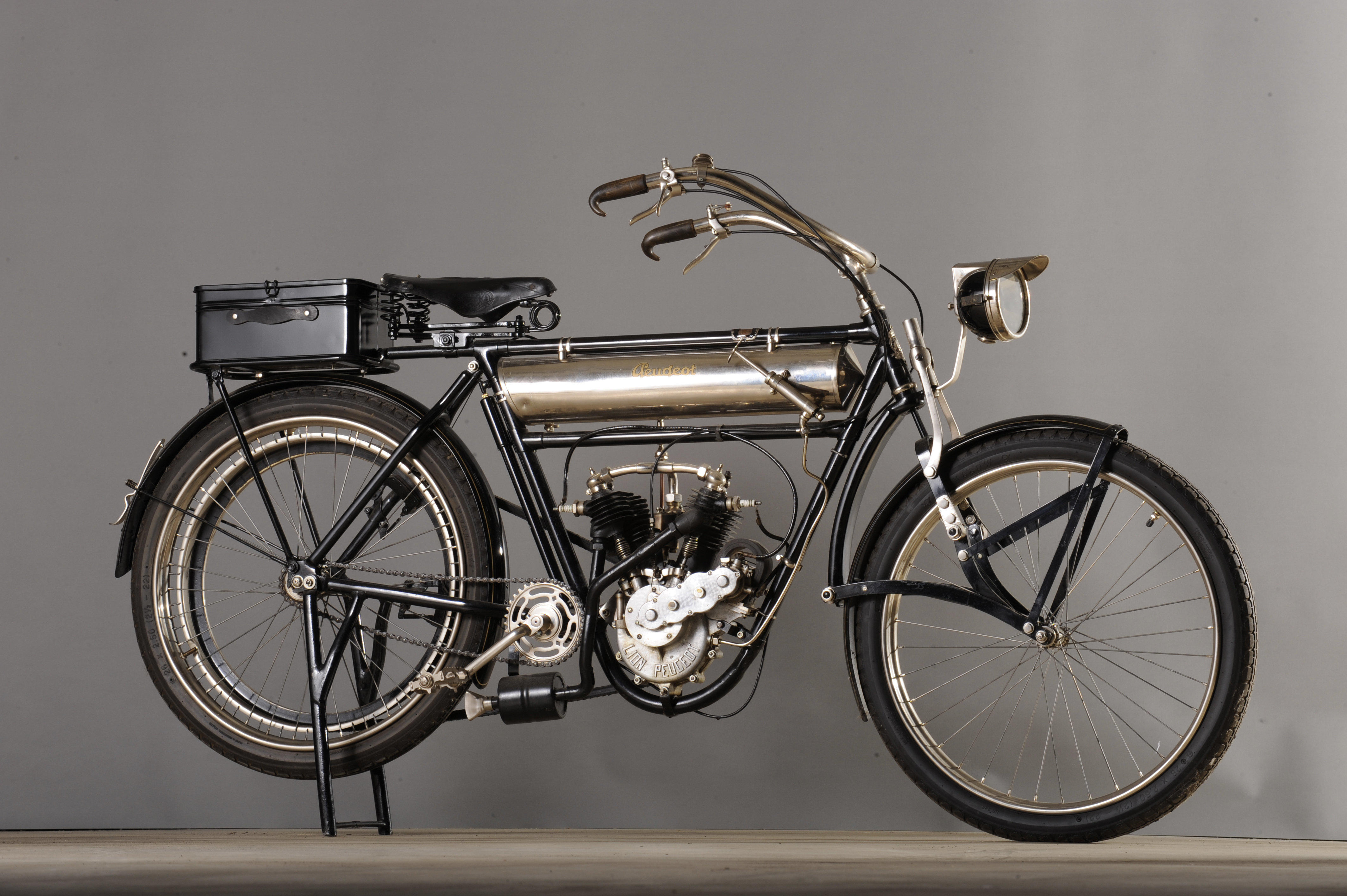 Offered from the Fabergé Museum in Baden