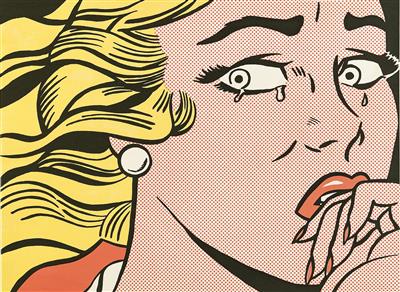 (New York 1923–1997) Crying Girl, 1963, signed rf Lichtenstein, offset lithograph in colours on wove paper, image size 43.7 x 58.8 cm, sheet size 45.7 x 60.8 cm, published by Leo Castelli Gallery, New York, framed Provenance: Galerie Burkhard Eikelmann, Düsseldorf Private Collection, North Rhine-Westphalia Literature: Mary Lee Corlett and Ruth E. Fine, The Prints of Roy Lichtenstein - A Catalogue Raisonné, 1948–1997, New York 2002, no. II.1, p. 282 Roy Lichtenstein’s work “Crying Girl”, dated 1963, is part of a series from 1961–1965, depicting women using a visual language adapted from comics. His work was modelled in particular on the works of the comics illustrators Tony Abruzzo, John Romita and Bernhard Sachs. Lichtenstein redesigned the works using a complicated process. Lichtenstein took his extremely close-up images of women, such as Crying Girl, mostly from Abruzzo, who captured his comic girls in a clichéd emotional state, with slightly open lips. Their tension, desire, fear and sadness are all expressed and visible. The offset lithograph of “Crying Girl” shows a crying woman, also with a slightly opened mouth. The viewer’s attention is focused on her agitated facial expression, emphasised by the extreme close-up. Her body language is exaggerated, similar to comics of the time. In contrast to later works, Lichtenstein used a monotone grid of points here, the colour palette is heavily reduced and the black contours are dominant. Lichtenstein produced the offset lithograph of “Crying Girl” for an exhibition at the Leo Castelli Gallery in New York. The lithograph was used as a poster image and, folded in dispatch format, as an invitation card for the exhibition. During the exhibition, further prints of the motif signed by Lichtenstein were sold in the Leo Castelli Gallery and given away to special customers. The “Crying Girl” was the artist’s first visual motif that the gallery owner Leo Castelli used for advertising purposes. Other motifs would follow, such as “Brushstroke” from 1965. The “Crying Girl” became a recurring motif in Roy Lichtenstein’s work and today is an icon of Pop Art. Her face is not just recognized by art lovers and collectors – it is world-famous.