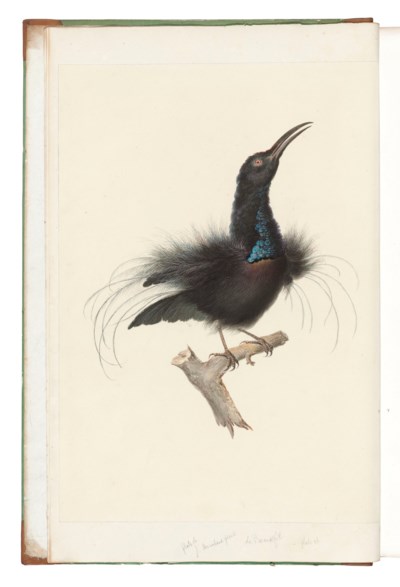 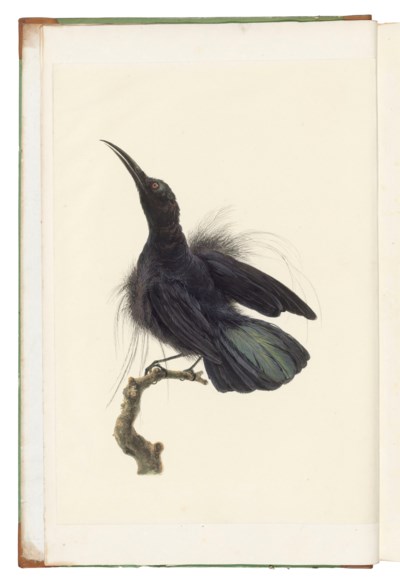 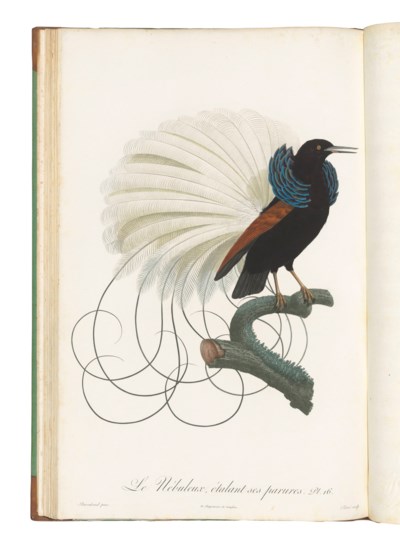 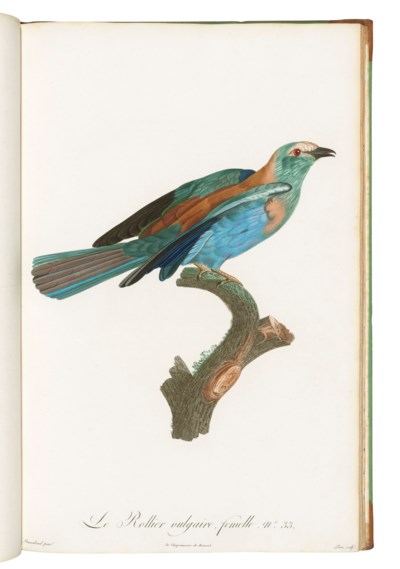 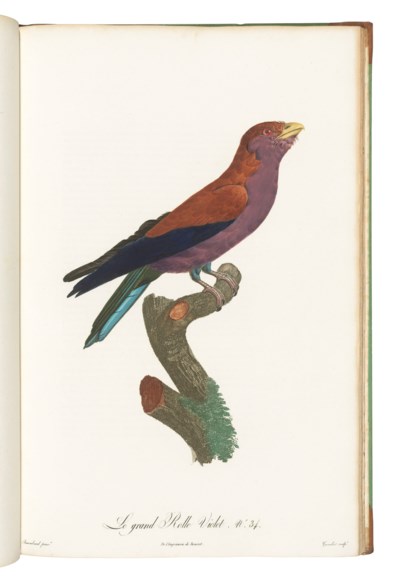 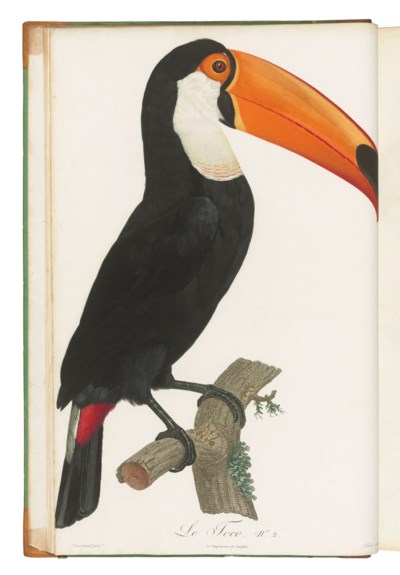 LEVAILLANT, François (1753-1824). Histoire naturelle des Oiseaux de Paradis et des Rolliers, suivie de celle des Toucans et des Barbus . Paris: Denné le jeune and Perlet, [1801-]1806. [ With :] – Histoire naturelle des Promérops, et des Guêpiers . Paris: Denné le jeune, [1806]-1807-[1816 or 1818?]. Levaillant's spectacular final work on exotic birds, with two original water- and bodycolour drawings probably by Barraband, and unusually with 26 plates in two states. This book is considered by Ronsil to be unequalled among French ornithological publications. The plates after Barraband are superb and effortlessly capture the beauty of some of the most eye-catching of all bird species: the first section includes 24 plates of birds of paradise; 15 of rollers; 17 of jays; 18 of toucans; 24 of barbets; 5 of tamatias; 3 of barbacous; 8 of jacamars. The second section contains 31 'pomerops' (including hoopoes); 21 bee-eaters; 20 trogons and touracos, and a supplement including toucans and rollers. The son of the French consul in Dutch Guiana, Levaillant was born in Paramaribo and inherited his father's love of travel. He was one of the first of a new breed of naturalists who achieved prominence towards the end of the 18th century by studying and recording birds in their natural habitat. Levaillant is described by Sitwell as 'the producer of the most comprehensive series of works on exotic birds' to precede Gould, and the technical virtuosity of the colour-printing, which is largely by Millevoy, brilliantly captures the beauty of the gouache and watercolour originals by Auguste and Barraband. Jacques Barraband (1767 or 1768-1809), was a pupil of Joseph Malaine (1745-1809). His work for Levaillant undoubtedly marks the high point of his career and makes clear why he was considered the best ornithological artist of his generation. 2 original drawings of Le Promefil on wove paper are mounted at the beginning of the work in vol. IV. They are both highly finished with water- and bodycolour, the first being more of a preparatory sketch with visible pencil drawing. They are two different profiles of the same bird, with the second drawing depicting a very similar pose in reverse to that depicted in plate 16. Although they are not signed by Barraband, and although the bird's claws are drawn a lot looser on the trunk than normally associated with Barraband's other work, the accomplished finish suggest these drawings may well be autograph. The production history of these books was complex, and the standard bibliographies disagree on its compositition. Anker 304, 305; BM(NH) III, 1100; Brunet III, 1033; Fine Bird Books (1990) p.118; Nissen IVB 559, 560; Ronsil p.298; Wood p.434; Zimmer p.393. 2 works bound in 5 volumes, folio (520 x 335mm). Oiseaux de Paradis , comprising 2 vols bound in 3: 2 half-titles, 2 volume titles and 2 part-titles, errata leaf in vol. I. 114 engraved plates after Jacques Barraband, printed in colours and finished by hand, 3 folding, etched by Bouquet, Grémillier and Pérée, printed by Langlois and Rousset (pp.5-8 in vol. III supplied in contemporary manuscript, folding plates with light marginal creasing and soiling with a few old repairs to versos, plate 100 cropped at foot with loss of imprint and 7 other plates cropped with losses to imprints and captions, plate 59 trimmed just into tailfeathers of bird). Promerops , comprising 3 parts bound in 2 vols: half-title and title in vol. IV, 2 part-titles in vol. V. 2 original watercolour drawings of Le Promefil [depicted in plate 16] bound in at beginning, 81 (of ?83) engraved plates by Guyard fils, Barrière, Bouquet and Grémilliet after Barraband and Auguste, printed in colours by Millevoy, Langlois and others, and finished by hand, 26 of which accompanied by an uncoloured second state, thus making a total complement of 107 plates (without plate 20 from part 2 and plate 16 from part 3, plate 67 in vol. V just trimmed into tail feathers and 2 other plates just trimmed into 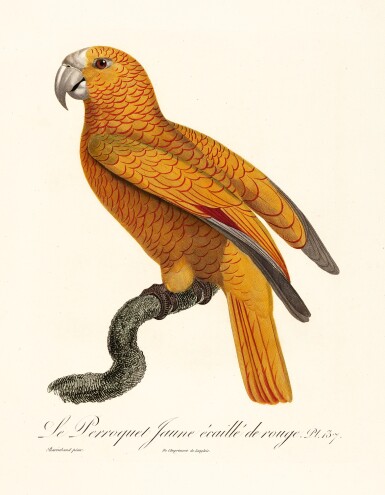 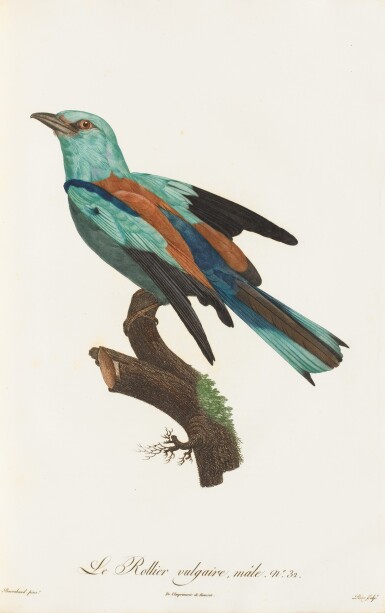