GREEK RED-FIGURE VOLUTE KRATER WITH MEDUSA HEADS AND LADIES OF FASHION Apulian, 4th century BC A fine and large volute krater of Magna Graecian workmanship; to one side, the head of a lady of fashion, her hair dressed in a sakkos with stephane at the hairline; locks falling to frame the face; flanked by large palmettes; below, a band of running wave patterning; the shoulder red, with pattern of vertical trails in black; to the neck, a palmette between two scrolling motifs; a foliate band below the rim enlivened with dots of ochre slip; the everted rim with a pendant wave pattern to the underside; the exterior rim red with vertical black trails; to the opposite side, an image of Hermaphroditus, nude, seated on a low draped stool; a large kylix in one hand; his feminine hair dressed in a sakkos ; his large wings ornately decorated with white and ochre detailing, the feathers delineated in grey; flanked by two large palmettes; to the neck, the head of a lady of fashion, her hair similarly dressed in a sakkos with stephane , curls framing the face; flanked by scrolling palmettes; below the rim, a row of six rosettes, all of individual design; above, a pattern of alternating pellets and pairs of trails; to the underside of the rim, a pendant wave pattern in black against a red backround; the exterior rim with wave pattern enlived with pale slip; the tall strap handles flanked by loops fashioned as arching swan heads; surmounted by volutes with white and yellow painted mascaroons styled as heads of Medusa on the front, the snakes in white slip, and reserved mascaroons on the reverse. 5 kg, 57 cm (24 1/2"). Very fine condition. Provenance From the estate of a deceased North Country collector, acquired over a 30 year period from the early 1970's; formerly acquired from Astarte Gallery, Britannia Hotel, London, UK. A BLACK FIGURE AMPHORA IN THE GREEK STYL

A GREEK TERRACOTTA FIGURE OF A GODDESS, 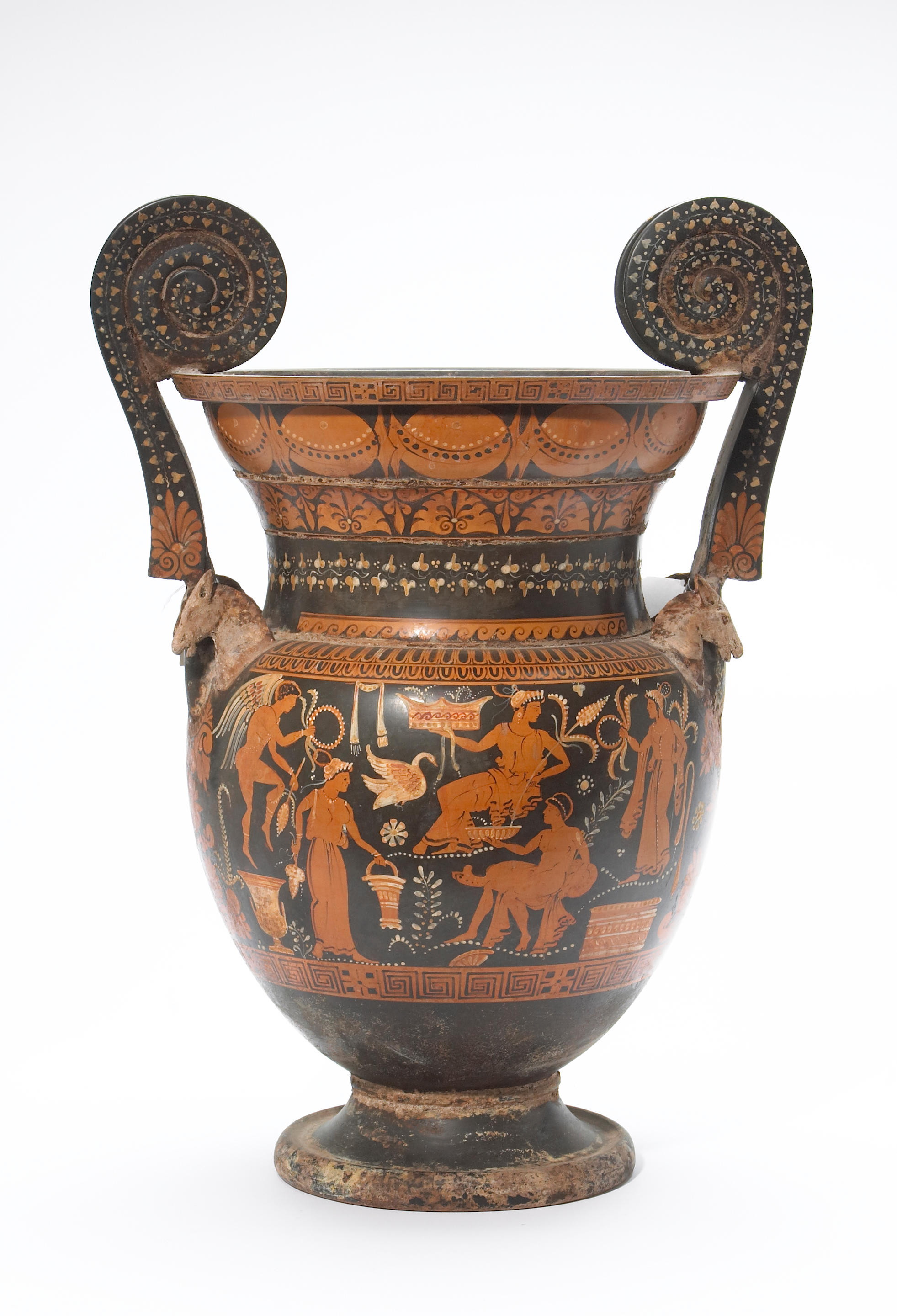 A PAIR OF ITALIAN (RICHARD-GINORI) BLACK